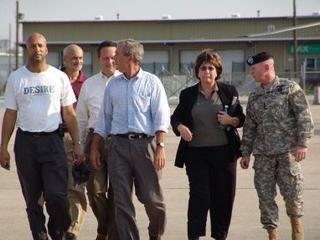 I just watched Soledad Oâ€™Brien interview New Orleans mayor Ray Nagin on CNN. She pressed him on whether he bore some responsibility for the tragedy at the Superdome and at the convention center.

Mayor Nagin responded that when Bush came to Louisiana, Bush offered to centralize the chain-of-command so that the feds could take over rescue and relief from Governor Kathleen Blanco. According to Nagin, Bush was ready to move immediately, but Blanco said she needed twenty-four hours to think about it.

Mayor Nagin was extremely frustrated with Governor Blanco to say the least. According to Nagin, while she was stalling, people were dying. This is quite a different picture than has been painted in the media thus far where everyone has been blaming the federal government for the slowness of the relief efforts. Hereâ€™s a transcript of the interview:

MAYOR RAY NAGIN, NEW ORLEANS: And what the state was doing, I don’t freaking know. But I’ll tell you, I am pissed. It wasn’t adequate. And then the president and the governor sat down. We were in Air Force One. I said, Mr. President, Madam Governor, you two have to get in sync. If you don’t get in sync, more people are going to die.

NAGIN: Whenever Air Force One was here.

NAGIN: And that this was after I called him on the telephone two days earlier. And I said, Mr. President and Madam Governor, you two need to get together on the same page, because the lack of coordination, people are dying in my city.

NAGIN: They both shook. I don’t know the exact day. They both shook their head and said, yes. I said great. I said everybody in this room is getting ready to leave. There was senators and his cabinet people. You name it. There were generals. I said everybody right now, we’re leaving. These two people need to sit in a room together and make a doggone decision right now.

O’BRIEN: And was that done?

NAGIN: The president looked at me. I think he was a little surprised. He said, no, you guys stay here, we’re going to another section of the plane and we’re going to make a decision. He called me in that office after that. He said, Mr. Mayor, I offered two options to the governor. I said — and I don’t remember exactly what they were, two options. I was ready to move today. The governor said she needed 24 hours to make a decision.

O’BRIEN: You’re telling me the president told you the governor said she needed 24 hours to make a decision?

O’BRIEN: Regarding what, bringing troops in?

NAGIN: Whatever they had discussed. As far as what the chain — I was advocating a clear chain of command so that we could get resources flowing in the right places.

O’BRIEN: And the governor said, no, according to the…

NAGIN: She said that she needed 24 hours to make a decision. It would have been great if we could have left Air Force One, walked outside and told the world that we had this all worked out. It didn’t happen and more people died. [source]

I am happy to see that Soledad Oâ€™brien acknowledged after the interview that there was plenty of blame to go around. She is the first reporter Iâ€™ve seen on CNN who has given any serious credence to the idea that anyone other than the Bush administration is to blame. But thereâ€™s really nothing else she could say after the startling revelation from Mayor Nagin.

Soledad and the other CNN correspondents looked quite surprised as Mayor Naginâ€™s account really didnâ€™t seem to confirm their working suppositionâ€”that Bush alone is to blame.