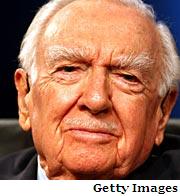 It would be an understatement to say that the Iraq war has caused some controversy here in the U. S. and abroad. Public opinion about the war ranges all the way from â€œThis is a just war worth winningâ€ to â€œThis war is an evil act of aggression, and the U. S. should pull out of Iraq now.â€ In other words, opinions range all the way from totally serious to totally not serious.

Unfortunately, it appears that the man who was once hailed as the most trusted man in America has joined the ranks of the decidedly not serious. Walter Cronkite, former CBS anchorman, delivered these remarks just yesterday to a group of reporters in Pasadena, California:

â€œWe had an opportunity to say to the world and Iraqis after the hurricane disaster that Mother Nature has not treated us well and we find ourselves terribly missing in the amount of money it takes to help these poor people out of their homeless situation, to help rebuild some of our important cities of the United States, and therefore we are going to have to bring our troops home . . . We would have been able to retire with honor . . . We’ve done everything we can. We’re going to have to leave it with [the Iraqis] someday, and it is my belief that we should get out nowâ€ (source, source).

Apparently, Cronkite has taken leave of himself (and common sense). If the U. S. were to retreat from Iraq now, it would leave pro-democracy Iraqis in a lurch, the country would likely descend into civil war, and the region would be even more destabilized than it was before the U. S. went in. Moreover, not only would it be immoral to make up a lie about the Hurricane being the cause of the withdrawal, it would also project weakness to all our enemies who would then think that the U. S. canâ€™t walk and chew gum at the same time.

So my question to Cronkite is this: How in the world can it be considered honorable or safe to tuck tail, run, and then make up a lie to explain why the country chooses to lose the war? If thatâ€™s what honor is to Cronkite, then someone needs to tell him that thatâ€™s not the way it is.