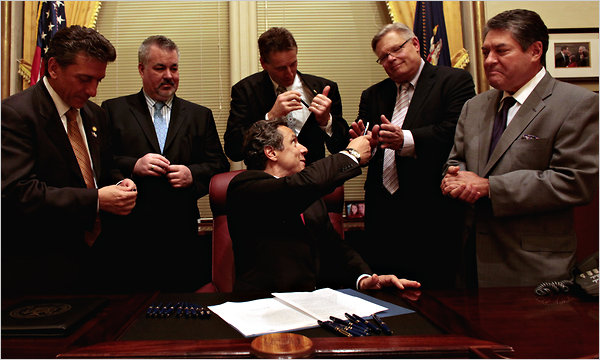 If you missed Michael Barbaro’s report in yesterday’s New York Times about the road to gay marriage in New York, you really should take the time to read it. The public story until now has been that a few key Republicans responded to emotional appeals from gay couples who wished to be wed. Barbaro shows that this is not what really happened.

What really happened is that some wealthy Republican donors decided to give political cover to a handful of Republicans in the NY Senate. In Barbaro’s words:

“The story of how same-sex marriage became legal in New York is about shifting public sentiment and individual lawmakers moved by emotional appeals from gay couples who wish to be wed.

“But, behind the scenes, it was really about a Republican Party reckoning with a profoundly changing power dynamic, where Wall Street donors and gay-rights advocates demonstrated more might and muscle than a Roman Catholic hierarchy and an ineffective opposition.”