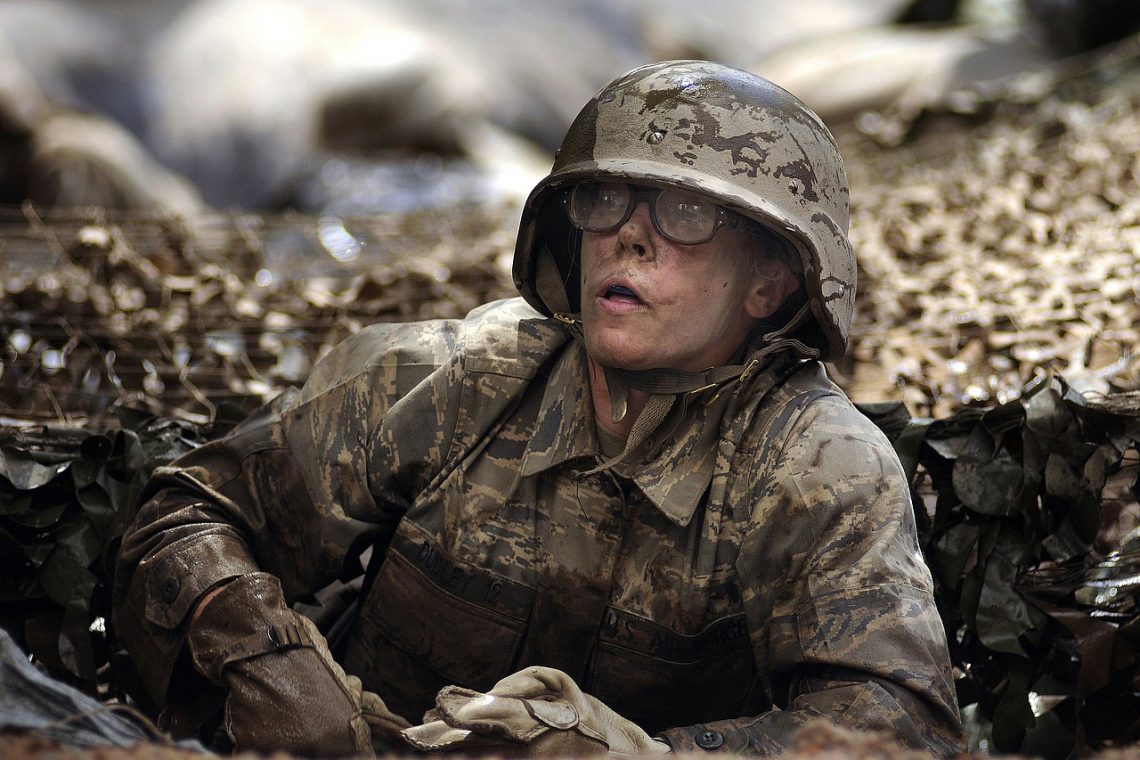 I know that the nation’s interest has been transfixed by the coronavirus outbreak. Nevertheless, there is another item in the news that is worth our attention. Politico reports that a congressional commission has recommended that women be required to register for the draft. From the report:

A congressionally mandated commission is recommending women should be eligible for the draft, a move that comes five years after the Pentagon opened all combat roles to women.

“This is a necessary and fair step, making it possible to draw on the talent of a unified Nation in a time of national emergency,” the commissioners wrote in the 255-page report, obtained by POLITICO.

We haven’t had the draft for many years now. If it were ever reinstated, however, the commission calls for requiring women to serve, including in combat units. Yes, you read that right. Women could be drafted to serve in forward areas where they would be required to engage in combat—sometimes hand-to-hand combat—with male enemy soldiers.

I understand that we are living in times of tremendous social change. Americans have by and large cast aside the “quaint” view that men and women are different and that they ought to have roles and responsibilities that correspond to those differences. So for some people, I’m sure this news merely appears as the next stage of progress toward equality in our society. I would invite readers to consider a different perspective.

Are the fortunes of women in our country really enhanced by sending them to be ground up in the discipline of a combat unit and possibly to be killed or maimed in war? Is there a father in America who would under any circumstance risk having his daughter shot or killed in battle? Is there a single husband in this country who thinks it okay for his wife to risk being captured by our enemies? To risk becoming a prisoner of war? Is this the kind of people we want to be? Perhaps this is the kind of people we already are. I would sooner cut off my arm than allow such a thing with my own wife and daughters. Why would I ever support allowing someone else’s to do the same? Why would anyone?

In 2013, Ryan Smith wrote in The Wall Street Journal about the reality that awaits women in combat. Smith illustrates the problem by describing his own experience as a Marine during the invasion of Iraq in 2003. Readers should be warned that what you are about to read is not for the faint of heart. But I think it is important for people to consider the reality of what is required of female infantrymen.

Many articles have been written regarding the relative strength of women and the possible effects on morale of introducing women into all-male units. Less attention has been paid to another aspect: the absolutely dreadful conditions under which grunts live during war…

We rode into war crammed in the back of amphibious assault vehicles. They are designed to hold roughly 15 Marines snugly; due to maintenance issues, by the end of the invasion we had as many as 25 men stuffed into the back. Marines were forced to sit, in full gear, on each other’s laps and in contorted positions for hours on end. That was the least of our problems.

The invasion was a blitzkrieg. The goal was to move as fast to Baghdad as possible. The column would not stop for a lance corporal, sergeant, lieutenant, or even a company commander to go to the restroom. Sometimes we spent over 48 hours on the move without exiting the vehicles. We were forced to urinate in empty water bottles inches from our comrades.

Many Marines developed dysentery from the complete lack of sanitary conditions. When an uncontrollable urge hit a Marine, he would be forced to stand, as best he could, hold an MRE bag up to his rear, and defecate inches from his seated comrade’s face…

When we did reach Baghdad, we were in shambles. We had not showered in well over a month and our chemical protective suits were covered in a mixture of filth and dried blood. We were told to strip and place our suits in pits to be burned immediately. My unit stood there in a walled-in compound in Baghdad, naked, sores dotted all over our bodies, feet peeling, watching our suits burn. Later, they lined us up naked and washed us off with pressure washers.

What kind of a society puts its women on the front lines to risk what only men should be called on to risk? In countries ravaged by war, we consider it a tragedy when the battle comes to the backyards of women and children. Why would we thrust our own wives and daughters into that horror? My instinct is to keep them as far from it as possible. I know I’m not alone.

Perhaps some people believe that women ought to be able to volunteer for whatever job they are qualified to do. Nevertheless, it’s one thing for women to volunteer for combat service. It’s an entirely different matter for them to be drafted into it. I have a hard time believing that the women of America would want to be forced into such conditions. Any man that would countenance for one second his 18-year old daughter being pressed into this kind of service is abdicating his responsibility. Are we really going to be the kind of people who press our wives and daughters and mothers to fight in combat?

Men and women are different. The roles that each of them play during wartime ought to correspond to those differences. Polling says that a bare majority of Americans support women being eligible for the draft. Nevertheless, I have a feeling that more people feel the same way as I do than are willing to admit it. We live in an egalitarian age that can hardly tolerate the “quaint” notion that men and women are different. So very few are willing to speak up. But on this one, reality is staring us in the face.

The welfare of our mothers, wives and daughters is a test of our nation’s character. How willing are we as people to pretend that there are no differences between men and women? It is one thing to stand and applaud as Bruce “Caitlyn” Jenner receives an ESPY award. But how many people would be willing to continue the gender charade when their daughters are carried off to war?

Men and women have obvious physical differences. On average, women are weaker than men. And you don’t have to be a conservative to acknowledge this. It’s an empirical fact observable by anyone with eyes to see. This puts women at a distinct disadvantage in combat. To illustrate the point, consider this testimony from MMA fighter Tamika Brents who describes what it is like to face a man in the ring:

What happened to Tamika during her fight with this man?

What Brents reportedly experienced at Fox’s hands was a concussion and a broken orbital bone that required staples. In other words, this woman was savaged by an opponent that was genetically advantaged with a thicker bone structure, longer reach, and denser musculature—or, put more simply, was a man. Fox was able to do this despite hormone treatments that made him more feminine in certain aspects.

Can you imagine this experience played out countless times on distant battlefields in places where women are treated as little more than chattel?  You need to imagine it because it may be your wife or daughter called up. Can you imagine sending your wife or daughter into the maw of deadly conflict with men who will do much worse to them than what happened to Tamika Brents in the MMA ring?

In a widely circulated letter from 2013, a female Marine named “Sentry” puts a fine point on it:

This country and our military are NOT prepared to see what the enemy will do to female POWs… How is our 24/7 news cycle going to cover a captured, raped, mutilated woman? After the first one, how are the men in the military going to treat their female comrades?… Men in the military will move heaven and earth to protect women, never mind what it does to the mission. I present you with Exhibit A: Jessica Lynch. Male lives will be lost trying to protect their female comrades. And the people of the US are NOT, based on the Jessica Lynch episode, prepared to treat a female POW the same way they do a man.

I know that many women have served admirably in our military. And there are certainly some who are physically exceptional and who may show some aptitude and interest in combat. But that’s just it. They tend to be exceptional. They are not the norm. And opening the draft to all women and potentially exposing all women to combat service is treating the exception as if it’s the norm. This is absurd and dangerous.

In addition to these issues, there is the very real possibility that physical requirements will have to be lowered in order to achieve the egalitarian ideal of women in combat units. If this happens (and many believe that it certainly will), our force will be weakened as a result. This too is absurd and dangerous.

At the end of the day, this issue is irreducibly moral. It goes to the heart of what kind of people we want to be. Are we really so beholden to the myths of gender theorists that we are willing to send our wives and daughters to be ground up by the rigors of a combat unit? I hope not.

It is certainly true that the lethality of combat units would be diminished by a move like this. Nevertheless, the main reason that we ought to oppose drafting women is that men and women are different. I know it’s not popular to say so, but that doesn’t make it any less true. This used to be obvious to everyone, but now it’s not. We would do well to remind ourselves what our grandparents and generations before them have always known.

Everyone in America ought to be scandalized by this news. But in a culture that is doing its level-best to obscure the differences between men and women, I’m wondering if it will even register on anyone’s conscience. To the extent that it doesn’t, we reveal just how far gone we are as a people.

We can only hope that Congress will not enact the recommendations of this commission. Time will tell. In the meantime, those of us who oppose this should make our voices heard.

No, Congress. You can’t have my daughters. If you need someone that bad, I will go. But not them.

If you come for them, we are going to have problems.https://t.co/nujdJlLUZy