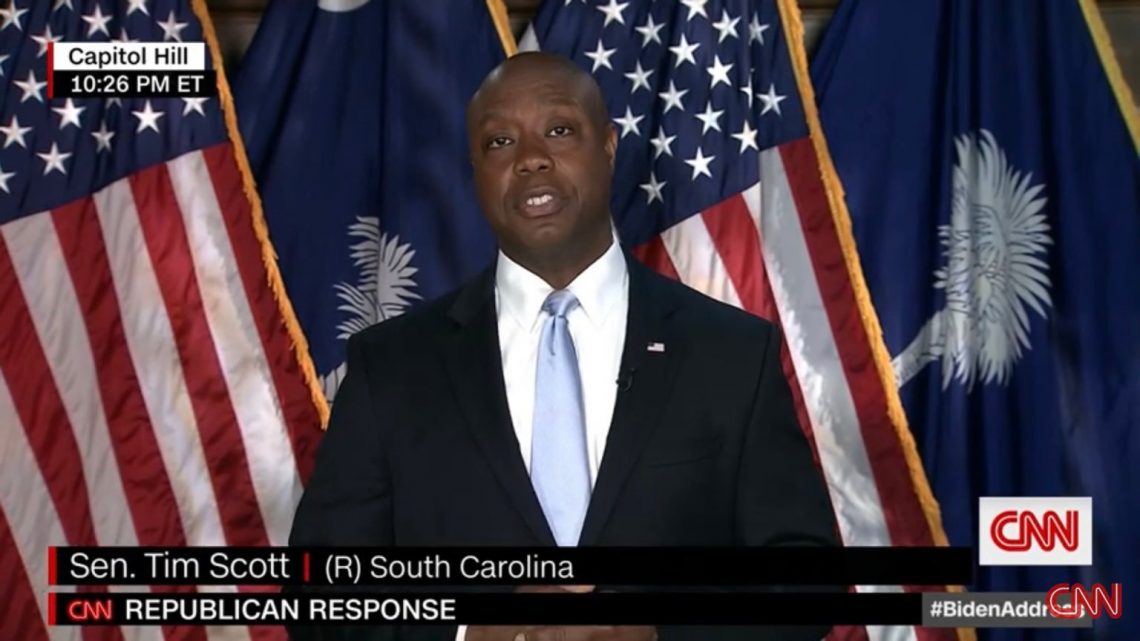 Last night, Senator Tim Scott gave the GOP response to President Biden’s speech to the nation (read here or watch below). In many ways it was an ordinary political speech, focusing on policy alternatives to the opposing party. In other ways, it was extraordinary.

Senator Scott talked openly about his faith. He spoke about his impoverished upbringing and “a praying momma” that kept him from going into a very dark place. He also talked about his conversion to Christ, proclaiming that “becoming a Christian transformed my life.” And then he concluded with words that are absolutely extraordinary to hear in a modern political speech:

I am standing here because my mom has prayed me through some really tough times. I believe our nation has succeeded the same way. Because generations of Americans, in their own ways, have asked for grace and God has supplied it. So I will close with a word from a worship song that helped me through this past year of Covid. The music is new, but the words draw from scripture.

May the Lord bless you and keep you, make His face shine upon you and be gracious to you. May His presence go before you, and behind you and beside you. In your weeping and rejoicing, He is for you. May His favor be upon our nation for a thousand generations, and your family and your children and their children.

So Senator Scott’s open profession of faith was quite exceptional. But so also were his remarks on race. Among other things, Senator Scott says this:

I have experienced the pain of discrimination. I know what it feels like to be pulled over for no reason. To be followed around a store while I’m shopping… I’ve also experienced a different kind of intolerance. I get called “Uncle Tom” and the n-word by progressives, by liberals. Just last week, a national newspaper suggested my family’s poverty was actually privilege because a relative owned land generations before my time.

Believe me, I know firsthand our healing is not finished…

When America comes together, we’ve made tremendous progress. But powerful forces want to pull us apart. A hundred years ago, kids in classrooms were taught the color of their skin was their most important characteristic. And if they looked a certain way, they were inferior.

Today, kids again are being taught that the color of their skin defines them, and if they look a certain way, they’re an oppressor. From colleges to corporations to our culture, people are making money and gaining power by pretending we haven’t made any progress at all, by doubling down on the divisions we’ve worked so hard to heal.

You know this stuff is wrong. Hear me clearly: America is not a racist country. It’s backwards to fight discrimination with different types of discrimination. And it’s wrong to try to use our painful past to dishonestly shut down debates in the present.

Immediately after the speech, I heard talking-heads criticize Senator Scott’s remarks as self-contradictory—on the one hand claiming to have experienced racial discrimination and on the other hand declaring that America is not a racist country.

But unless you’re trying to find a problem, there really isn’t a contradiction here. Senator Scott was simply making a generalization in saying that the “America is not a racist country.” He was by no means trying to give the nation a clean bill of health on racism. This is obvious from what he shared about his own experiences of racial discrimination.

The import of Senator Scott’s remarks was his intentional targeting of false narratives stemming from the ideology of Critical Race Theory (CRT). CRT holds that racism is pervasive and normal in American life. Racism is the default state of affairs in every nook and cranny of our culture. There is no place where racism isn’t, and if you can’t see that then you aren’t “woke,” and you need to open your eyes.

In this narrative, there hasn’t been any significant progress in the nation on racial issues, just a rearranging of the deck chairs on a still doomed ship. Due to “interest convergence,” the apparent progress in civil rights “may have resulted more from the self-interest of elite whites than from a desire to help blacks” (Delgado and Stefancic, p. 9).

Senator Scott is pushing back against this cynical CRT narrative that says racism is always everywhere with no real progress toward justice. That’s not saying that racism has disappeared and is no longer a problem. It most certainly still does persist in some places and is still a problem. It’s simply saying that it is no longer the pervasive evil that it once was under slavery, Jim Crow, and segregation. There has been real, laudable progress.

In my view, this is the rational, common-sense, reality-based approach to the issue. We can’t sweep all claims of discrimination under the rug as if the nation has been cured of every trace of racism. It certainly hasn’t been. But neither can we make racism the singular diagnosis to every social ill. Neither of these extremes is the truth, but you wouldn’t know that from listening to extremist politicians.

Senator Scott’s speech is a happy exception to the false narratives, and I am grateful for it. I hope we will see more leaders recognize the danger of this false ideology and speak up. Our divided nation needs this kind of clarity more than ever.

UPDATE: After posting a link to this essay on social media, some commenters objected, claiming that I had misrepresented CRT. They claimed that actual critical race theorists would not agree with the idea that racism is pervasive and seeping into every area of American life. Those critics are mistaken.

I responded to their claim with a number of quotations from CRT proponents. Neil Shenvi followed with other similar evidence. I post below some of the material that Neil and I shared. My point is simply this. This claim is not a sidebar in the literature. It’s everywhere.

“We need to see racism as structural in order to see its insidiousness. We need to see how it seeps, like a noxious gas, into everything”
–Eddo-Lodge, Why I Am No Longer Talking To White People About Race, p. 222

“From an antiracist perspective, the question is not, ‘Did racism take place’ but ‘How was racism taking place’ because the assumption is that racism is always at play, always operating.”
–DiAngelo, What Does it Mean to Be White, p. 330

“Racist ideas have defined our society since it’s beginning and can feel so natural and obvious as to be banal…”
–Ibram X. Kendi, How To Be an Antiracist, p.23

“Racism is unavoidable and… it is impossible to completely escape having developed problematic racial assumptions and behaviors.”
–Robin Diangelo, White Fragility, p. 4

“Racism is ordinary, not aberrational… the usual way society does business, the common, everyday experience of most people of color in this country.”
–Delgado & Stefancic, Critical Race Theory, p. 8

“Racist behavior is not an aberration in everyday life; it is often normal practice in deeply racialized social systems.”
–Kafi D. Kumasi, “Critical Race Theory and Education: Mapping a Legacy of Activism and Scholarship,” p. 210

“Today ‘new racism’ practices have emerged that are more sophisticated and subtle than those of the Jim Crow era. Yes, as I will argue, these practices are just as effective as the old ones in maintaining the racial status quo.”
–Bonilla-Silva, Racism Without Racists, p. 25