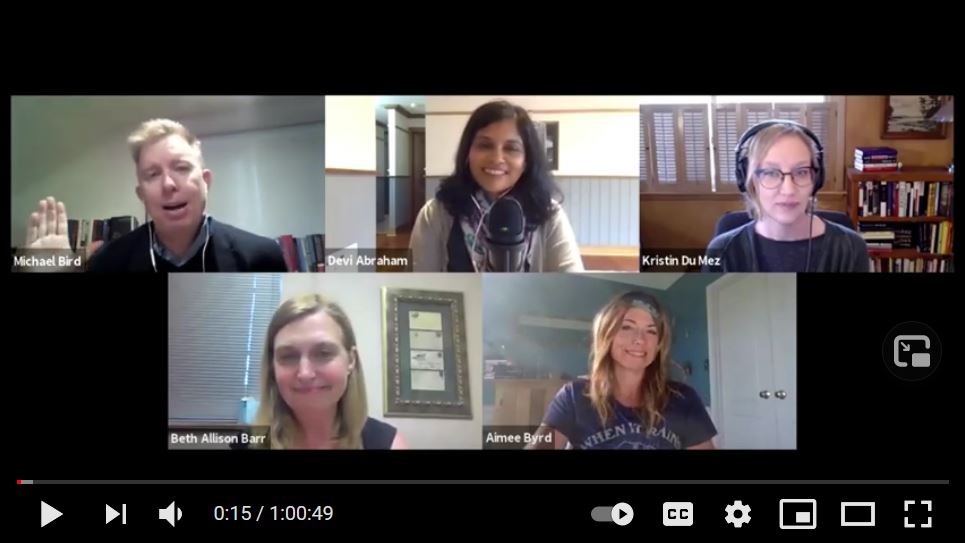 Mike Bird and Devi Abraham recently interviewed authors Kristin DuMez, Beth Allison Barr, and Aimee Byrd (see video below). All three of these authors have written books condemning complementarianism. Both DuMez and Barr are convinced egalitarians. While I have never heard Byrd own that label, she has said in her book that she is not a complementarian. In any case, it’s difficult to detect any daylight between Byrd’s position and that of the two egalitarians in this interview. They all three are very much opposed to complementarian theology, which is denigrated as abusive patriarchy in this interview.

One thing that they all three seem to agree on is the need for women to take on more teaching and leadership positions over men in churches. On this point, there was one revealing moment at the end of the interview that I think complementarians would do well to take note of. Devi Abraham asks the authors what one thing needs to change in evangelical churches, and Beth Allison Barr answers first with this:

You know, I would like for women to be able to teach Sunday School… In order for women to be accepted in leadership roles, we’ve got to put them in leadership roles… Lots of men have this story that their minds actually weren’t changed by what they read. Their minds were changed by hearing women. And hearing women teach and realizing they could be edified, that they could grow spiritually from hearing a woman. So I would really like for more evangelical churches to put women in adult leadership roles… So I’m not expecting pastorate immediately. Everything takes time. But just put them in more spaces where they actually can use these gifts. Don’t confine them only to women’s ministry and to children’s ministry and to the dream team in the kitchen. Put them out in leadership roles… Let women teach the Bible. Let them teach actual theology and good stuff. And let’s see them do it… If I could change one thing, I would put more women in adult Sunday School and teaching places in churches.

Notice that the endgame for Barr is to have women hold the office of pastor, but she recognizes that it’s unrealistic to expect complementarian churches to do that all at once. The strategy is to put women in teaching and leadership roles over men. After people see that a woman can fulfill the function of a pastor, they will be more open to accepting her into the office of pastor. The endgame is not teaching Sunday school. It’s the pastorate.

The strategy here is very much akin to the one espoused by Baptist Feminist theologian Molly Marshall, who argued that most Southern Baptists oppose women in the pastorate, not for biblical or theological reasons, but because they have never seen a woman in the pulpit.1 The logic is very simple. People’s biblical resistance to female pastors can be weakened and overcome by having women fulfill the functions of a pastor. If she looks like a pastor and talks like a pastor, then she’s a pastor (or at least she should be).

All of this is relevant to intra-complementarian debates between so-called narrow complementarians and broad complementarians. The narrow comps wish to limit Pauline prohibitions like 1 Timothy 2:12 to the office of pastor. Other than that narrow limitation, a woman ought to be allowed to fulfill any ministry function that an unordained man can fulfill.2 Thus, if a church ever has a guest preacher or allows a male pastoral intern to preach to the entire congregation, then of course a woman ought to be allowed to do the same.

Whether they realize it or not, the narrow complementarian position provides an answer to what Beth Allison Barr says is most needful in evangelical churches—to put women in more positions of teaching and leadership over men. Complementarians need to consider this carefully because Barr is correct about what the effect of this practice will be. The more people become accustomed to seeing women fulfilling pastoral functions, the more willing they will be to accept women into pastoral office. It’s only a matter of time before one leads to the other. Indeed it is already happening.

The big question behind all these debates really boils down to what the Bible teaches. Is 1 Timothy 2:12, for example, placing a prohibition on the office or function of a pastor? Tom Schreiner argues that it is the latter,

When we read 1 Timothy 2:12, it doesn’t directly speak to the issue of office; it addresses the matter of function, prohibiting women from teaching and exercising authority over a man. I glean from this point that office isn’t the only thing in Paul’s mind; the function is important to him as well. In fact, the verse speaks directly to the issue of function and says nothing about the office per se. It is interesting, therefore, that many seem to turn the verse around by allowing the functions, but denying the office. 3

Does God gift women to teach the Bible? There’s no question that he does, and their gifts are vital to the church. The debate between complementarians and egalitarians (and now narrow complementarians) is not about that. Our differences are about what context such teaching should occur. The Bible has very direct words about that context, but those words in Scripture are undermined by egalitarian teaching.

I recently heard of a brother who said he was open to women pastors because when he was in college, the female teachers in his college ministry were often better than the men. And yet, complementarianism doesn’t deny that women can be awesome teachers, some better than men. That’s never been the question. It’s about trusting that God has good purposes for the distinct callings he places on men’s and women’s lives. Barr and the other authors seem to assume otherwise. They seem to think they need to prove women can teach too. Our succinct reply is: Of course they can teach. That’s not the point. God’s distinct design and calling of men and women is the point, but that good creation design is lost in egalitarian error.

We do well to note the method of persuasion this entire group of authors seems to be relying on in this interview–the Barr quote even admitting it. They believe they’ll win the day by appealing not to Bible or to reason but to emotion and experience. It’s what their books do. It’s a strategy of normalization then acceptance. It’s striking to me that Barr would be so open about this approach. Sincerely, it’s how theological error always works: normalize it, and make it more appealing to people who otherwise ought to know better. Can you think of anywhere in Scripture where the prophets or apostles seek to persuade by normalizing something like this? I can’t either.

And that is the concern that I hope complementarians will consider more carefully. The narrow complementarian position seems inherently unstable and tilted toward an egalitarian framing of nature. It adopts some of the same exegetical conclusions of egalitarians. It minimizes differences in design that ground the biblical prohibitions on women teaching and exercising authority over men. Indeed, it renders the prohibitions arbitrary and without foundation in nature, for women and men can function interchangeably in ministry. The long-term prospects for this position are not encouraging. Indeed, they may end up exactly where Beth Allison Barr hopes they will.

1 Russell D. Moore, “After Patriarchy, What? Why Egalitarians Are Winning the Gender Debate,” The Journal of the Evangelical Theological Society 49, no. 3 (2006): 571.