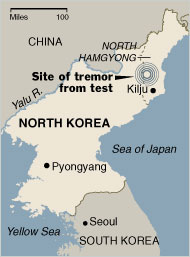 Itâ€™s late tonight (1:09am), but I have been glued to the coverage of the news out of southeast Asia. North Korea claims to have successfully tested a nuclear weapon. There is no definitive confirmation yet, but the U. S. and South Korea say they detected seismic activity in the area of the test.

What are the options for the U. S. and its allies in addressing this new threat? Well, it would appear that there are no good options. Any military solution the U. S. might consider would result in a destabilization of the region. 1,000,000 North Korean soldiers would probably march right across the DMZ, and there would be nothing that South Korea could do to resist it.

The U. S. might try to topple the regime somehow, perhaps using conventional weapons. But even if that tactic were successfull, it would likely result in a humanitarian crisis with hundreds of thousands of North Koreans fleeing to neighboring countries.

If the U. S. and the international community choose not to repond, then we will undoubtedly see an arms race in southeast Asia. Japan could probably produce a nuclear weapon in a matter of months. South Korea would also consider resurrecting its nuclear program.

The scariest prospect (which Iâ€™ve written about before) is that North Korea will give a nuclear weapon to one or more terrorists who will try to use it to attack American and other western cities.

Honestly, I donâ€™t know what the proper response is at this point. All of the options seem to lead to some kind of a bleak outcome. I donâ€™t covet the Presidentâ€™s position right now. Heâ€™s got some important decisions to make, and I for one will be praying for him.