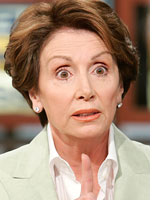 Is it time to hand Congress over to liberal leadership? If the Republicans lose their majority in the House of Representatives this November, Nancy Pelosi, liberal Democrat from San Francisco, will become the next Speaker of the House. The Associated Press reports what she has promised to do in her first 100 hours as Speaker.The most troubling tidbit in this report is not her promises to roll-back the Bush tax-cuts and to raise taxes (though who could possibly be very excited about that prospect?). The most distressing part is her vow to broaden the types of stem cell research allowed with federal funds and to do so with what she hopes to be â€œa veto-proof majority.â€

Pro-life voters donâ€™t have to be in lock-step when it comes to tax policy, but they should be roused from complacency by this promise from Pelosi to use federal tax dollars to fund the killing of embryonic humans. But if the killing of pre-born humans is your cup-of-tea, then I guess Pelosi is your guy.