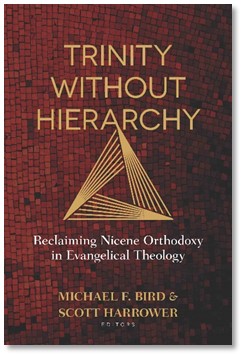 Mike Bird and Scott Harrower have recently edited a new volume of essays titled Trinity Without Hierarchy: Reclaiming Nicene Orthodoxy in Evangelical Theology (Kregel, 2019). One chapter in the book engages with an essay I wrote many years ago on Philippians 2:6. The chapter is titled “There Is a Method to the Madness: On Christological Commitments of Eternal Functional Subordination of the Son,” and it is written by Jules A. Martínez-Olivieri. I am not going to engage the whole essay, but I do want to offer a brief clarification regarding the following paragraph from Martínez-Olivieri’s chapter.

Consider Denny Burke [sic], for example, who evaluates the will-of the Son simpliciter without making an explicit logical distinction between the Son’s human will. Arguing for a minority report translation of Philippians 2:6, which would render “form of God” and “grasping for equality” as referring to different realities (the former to an ontological condition, and the latter to a functional characteristic of Christ), Burke [sic] infers that Jesus’ desire for equality with God the Father “would have precluded Jesus from his taking the form of a servant and from his becoming in the likeness of men. In his preexistent state, Jesus decided not to pursue ‘equality,’ but to pursue incarnation.” Here Burke [sic] envisages the divine will of the Son (which the tradition has rendered a singular divine will), as functioning as a distinct center of consciousness that is capable from eternity past to come to an agreement with another center of consciousness, the Father (p. 228).

I just want to say up front that I do not believe that the divine will can be severed as Martínez-Olivieri alleges above. I certainly did not intend to communicate any such idea in the article that he is interacting with. There is one single divine will, and that has been true from all eternity. To posit “another center of consciousness” in the immanent trinity would lead to some kind of tritheism, which I emphatically reject and would have rejected when I originally wrote the article.

So what gives with this article that I wrote and that Martínez-Olivieri criticizes?

Even though I think Martínez-Olivieri mischaracterizes my views, I am sympathetic to the reasons why he might have done so. The article in question originally appeared in a 2004 issue of Tyndale Bulletin, and a version of it was later republished in a collection of essays in 2012. The work was primarily a work of exegesis on Philippians 2:6 with the later version dipping a toe into some potential dogmatic implications. If I were writing it now, I would have done it differently. I would have made clear what seems to be unclear to Martínez-Olivieri and perhaps to others—that there is no division of will in the immanent trinity. I am sorry for anything in that article that may have given an impression otherwise, but a division of will is not what I intended to communicate.

My actual argument was about the Son’s submission to the Father in the economy not in the immanent trinity. This is a confusing point because I did in fact argue that Philippians 2:6 gives us a Pauline description of the preincarnate Christ. Paul says that “although [Christ] existed in the form of God, he did not regard equality with God as a thing to be grasped for” (Phil. 2:6, my translation). The point was not that the Son’s essence or will had become separate from the Father’s. The Son’s submission was “functional,” which I understood in those days to refer to the Son’s mission in the economy. I believed that the economy in some sense commenced in eternity with this agreement between the Father and the Son.

If the exegesis is correct (and I should stipulate that I’m less certain of it today than I was in 2004), then it would give evidence for some sort of preincarnate agreement between Father and Son. I didn’t have the words for it then, but I think this exegesis would give scriptural evidence for what theologians call the pactum salutis or the covenant of redemption.

My thinking on these matters has been really influenced over the years by the work of Michael Allen and Scott Swain, especially their 2013 article “The Obedience of the Eternal Son.” But it was perhaps Scott Swain’s chapters in Christian Dogmatics (Baker, 2016), that really crystalized things for me. Swain has a really helpful chapter on the Trinity which is immediately followed by a chapter on the pactum. These chapters should be read together.

Among other things, Swain notes that the pactum salutis has been a fixture in reformed theology since the seventeenth century, and it refers to a pact or a covenant that the Father enters into with the pre-incarnate Son. The pactum refers to the Father’s “eternal appointment of the Son of God, by way of covenant, to become the incarnate redeemer and head of his adopted siblings” (p. 109).

Swain notes that because the pactum occurs in eternity before the incarnation, the doctrine has been criticized as undermining the orthodox doctrine of the Trinity. For example, Karl Barth says that the pactum divides the “Triune Godhead” into “two distinct subjects” (p. 121). Robert Letham argues that the doctrine “opens the door to heresy” because it divides the singular divine will of God and amounts to tritheism. Letham writes:

Letham’s and Barth’s charge against the pactum is the same criticism that Martínez-Olivieri’s levels against my essay. Swain nevertheless defends the pactum by showing its biblical warrant and by showing how it coheres with Nicene orthodoxy. He writes:

“When it comes to the relationship between the pactum salutis and the divine will, we must consider not only that will’s unity, but we must also consider that will’s tripersonal manner of subsistence if we are to appreciate the doctrine’s status as an instance of orthodox Trinitarian reasoning” (p. 122).

Swain explains that the Son’s pre-incarnate submission to the Father in the pactum is an “application of orthodox trinitarian principles to the locus of God’s eternal decree.” He elaborates:

Again, I think Swain has done some really solid work here. If there is a sense in which Trinitarians might speak of the son’s preincarnate submission to the Father, I think this is the only way to do it.

The conceptual moves that make up the doctrine of the covenant of redemption make room for a divine disposition that is a reality ad intra, yet is directed ad extra; free but not essential; truly rooted in God yet truly not necessary. If it works, it lets you have your cake and eat it, too.

If I were writing that old essay now, I would stress that my exegesis of Philippians 2:6 leads us to the theological gasketry called the pactum salutis. That is in fact where I think it leads us, even if the point wasn’t sufficiently clear in my old article.

Bird’s and Harrower’s new book looks really stimulating. You can get a copy here.