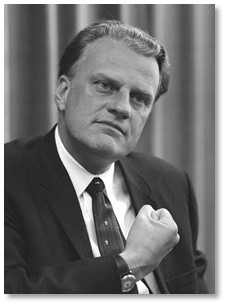 In the early 1940’s, the ministry “Youth for Christ” was being led by two fiery young evangelists—Charles Templeton and Billy Graham. These two men were travelling around the world together preaching at rallies and calling people to Christ. Eventually, Billy Graham would part from the ministry and begin his own evangelistic work through what would eventually become the Billy Graham association.

But in those early days, Graham was tag-teaming with Templeton with Youth for Christ. At the time, very few people knew that Templeton’s faith was coming unraveled even as he was calling other people to Christ. Templeton had been converted as a young man, never went to college or finished high school, and certainly never went to seminary. Nevertheless, he began the life of an evangelist right at his conversion in 1936. By 1946, he was travelling with Billy Graham holding evangelistic crusades all over North America and Europe and was beginning to question the very message he was preaching.

There were certain elements of Christianity that he could not reconcile with his own reasoned conclusions about how God ought to behave in the modern world. In his 1996 memoir, he wrote about his faltering faith and his decision to leave the ministry and go to Princeton Theological Seminary. On his way out, Templeton tried to persuade Billy Graham to go with him to Princeton. But the two men were in totally different places. Templeton describes a confrontation that the two had near the end of their travels together:

All our differences came to a head in a discussion which, better than anything I know, “explains” Billy Graham.

I had said. “But Billy, it’s not possible any longer to believe the biblical account of creation. The world wasn’t created; it has evolved over millions of years. It’s not a matter of speculation, it’s demonstrable fact.”

“I don’t accept that,” he said, “And there are reputable scholars who don’t.”

“Who are they?” I said. “Men in conservative Christian colleges?”

“Most of them, yes. But that’s not the point. I believe in the Genesis account of creation simply because it’s in the Bible. I’ve discovered something in my ministry: when I take the Bible literally, when I proclaim it as God’s Word, I have power. When I stand before the people and say, ‘God says,’ or ‘The Bible says, ‘the Holy Spirit uses me. There are results. People respond. Wiser men than you or I have been arguing questions like this for centuries. I don’t have the time or the intellect to examine all sides of each theological dispute, so I’ve decided, once and for all, to stop questioning and to accept the Bible as God’s Word.”

“But Billy,” I protested, “you can’t do that. You don’t dare stop thinking. Do it and you begin to die. It’s intellectual suicide.”

“I don’t know about anybody else, “he said, “but I’ve decided that that’s the path for me.”

And so Templeton and Graham went their separate ways. Graham went the way of the gospel, and Templeton went the way of Demas (2 Tim. 4:10). Templeton eventually abandoned the faith altogether and became an avowed agnostic. Billy Graham went on to preach the gospel to more than 100 million people and to millions more through television and mass media. According to Christianity Today, “Nearly 3 million have responded to his invitation to ‘accept Jesus into your heart’ at the end of his sermons. He proclaimed the gospel to more persons than any other preacher in history.”

Billy Graham died today at the age of 99. It is hard to overstate the legacy and influence of this great man. He truly was the greatest evangelist of our time. And there is no way any of it would have happened had the confrontation with Templeton gone differently. For Graham and for every faithful preacher, it is God’s power in the preached word that makes all the difference.

The essay above is adapted from a message I delivered at Kenwood Baptist Church in 2015. A big hat-tip to Justin Taylor, from whom I first read about this confrontation between Graham and Templeton (“Charles Templeton: Missing Jesus“). You can download the full message here or listen below.