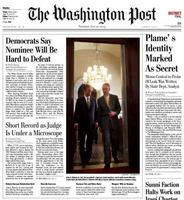 The headline of a story in todayâ€™s Washington Post reads â€œPlame’s Identity Marked As Secret.â€ The first paragraph of the story goes on to state the following:

â€œA classified State Department memorandum central to a federal leak investigation contained information about CIA officer Valerie Plame in a paragraph marked â€˜(S)â€™ for secret, a clear indication that any Bush administration official who read it should have been aware the information was classified.â€

At first blush, this information looks very damning for Karl Rove. Itâ€™s the kind of headline that makes a really big splash on the front page of a newspaper. Yet one finds critical qualifications buried in the text of the story.

First, the memo was apparently written by a State Department intelligence analyst and was intended for then Secretary of State Colin Powell, not Karl Rove.

Second, though Valerie Wilsonâ€™s name appears in the paragraph marked as secret, it is not at all clear that her own status was marked as covert. It looks like her name appears merely as background.

For readers who bother to read the whole article, thereâ€™s not much of a splash after all.