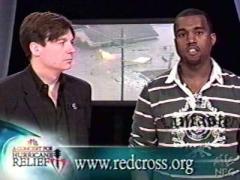 Hip-hop star Kanye West went on a tirade during NBCâ€™s disaster relief fundraiser tonight. West and Michael Myers were paired together during a segment so that they could appeal to a nationwide TV audience to donate money to the Red Cross. After Michael Myers opened with a few remarks, Kanye West began a meandering monologue that was clearly not written on his cue card and was very difficult to understand. However, a few things came through loud and clear.

First, West made the outlandish claim that the government had given the troops in New Orleans permission to shoot black people. Second, he accused the media of racist coverage, alleging that reporters are saying that black families are looting while white families are just looking for food. Third, West punctuated his screed with an low-blow against the President: â€œGeorge Bush doesn’t care about black peopleâ€ (the Washington Post has the entire exchange here).

I fear that West has been drinking deeply from the propaganda of the race-baiters who have been trying to exploit this tragedy for their own ends. For instance, consider Al Sharptonâ€™s accusation on Keith Olbermannâ€™s program just last night: â€œAnd the real question is not only those that didnâ€˜t get out. The question is why has it taken the government so long to get in. I feel that, if it was in another area, with another economic strata and racial makeup, that President Bush would have run out of Crawford a lot quicker and FEMA would have found its way in a lot soonerâ€ (source).

Consider also how Jesse Jackson criticized the federal response to the disaster: â€œHow can blacks be locked out of the leadership, and trapped in the suffering? It is that lack of sensitivity and compassion that represents a kind of incompetence. . . There’s a historical indifference to the pain of poor people and black people . . . [the new media has] criminalized the people of New Orleans” by focusing on violence in the city (source).

So you see, Kanye West didnâ€™t say anything that these race-baiters havenâ€™t been saying all week. But Westâ€™s remarks do reveal just how reckless the rhetoric of the Jacksons and the Sharptons can be. What should have been a non-partisan appeal to the better angels of American nature turned into a counter-productive blame game.

Nevermind the fifty-percent of Americans who would take great offense at Westâ€™s parroted accusations. Nevermind the fact that such remarks might disincline some from contributing to the Red Cross disaster-relief fund. Just blame Bush and exploit the tragedy for partisan advantage. That does not sound very compassionate to me.

NBC tried to recover the good will of its viewers with the following statement that was released after the concert:

â€œKanye West departed from the scripted comments that were prepared for him, and his opinions in no way represent the views of the networks. It would be most unfortunate if the efforts of the artists who participated tonight and the generosity of millions of Americans who are helping those in need are overshadowed by one personâ€™s opinionâ€ (source).

I am not saying that the south doesnâ€™t have serious racial issues to confront. Believe me, we do. And I am certain I will have more to write on that topic later. But tonight, I am just troubled by the irresponsible, inflammatory statements made by West.