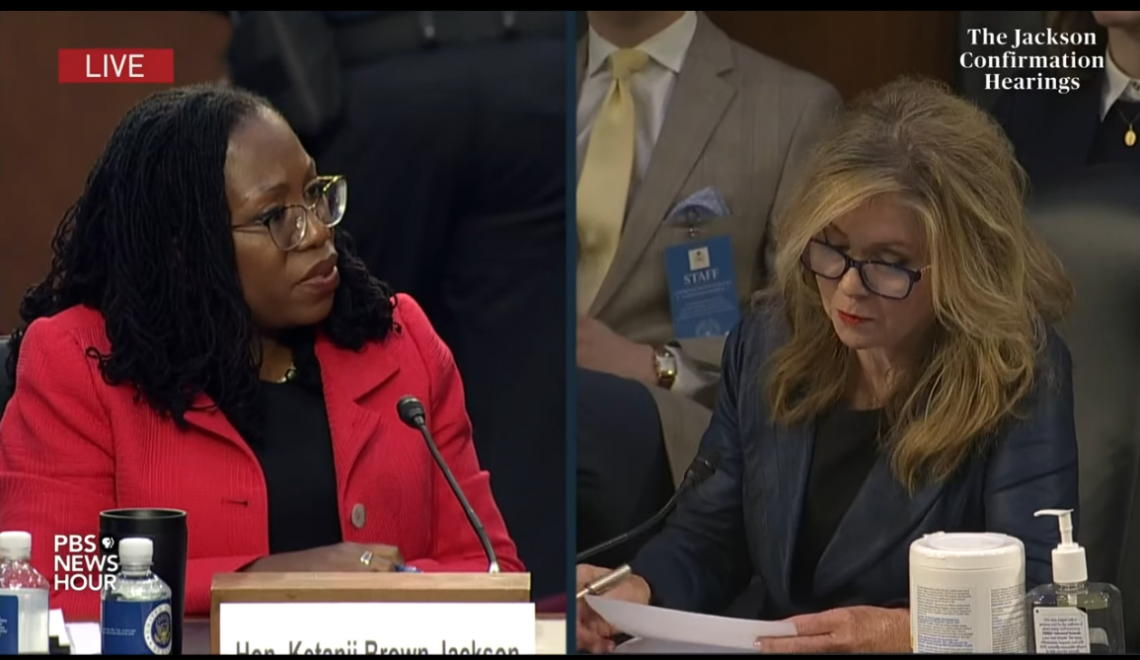 The video at the bottom of this post is queued up to an extraordinary exchange that occurred at yesterday’s Supreme Court confirmation hearings. Senator Marsha Blackburn asks Supreme Court nominee Ketanji Brown Jackson if she can define what a woman is. Here’s a transcript of what they said, and you’re not going to believe it.

Blackburn: Do you agree with Justice Ginsburg that there are physical differences between men and women that are enduring?

Jackson: Um, Senator. Respectfully, I’m not familiar with that particular quote or case, so it’s hard for me to comment as to whether…

Blackburn: Okay… Do you interpret Justice Ginsburg’s meaning of “men” and “women” as male and female?

Blackburn: Okay. Can you provide a definition for the word woman?

Jackson: Can I provide a definition? No.

Jackson: Mm. Not in this context. I’m not a biologist.

If there is a better exemplar of our times, I don’t know what it is. Here we have a Supreme Court nominee who either can’t or won’t offer a definition of what a woman is. Why? Because she claims that she’s not a biologist. Really? I guess that explains why I couldn’t make a sandwich today. I gave up when I realized that I wasn’t a baker and couldn’t confirm the identity of the bread in my pantry.

Have we really come to the point that a sitting judge and nominee for the highest court in the land cannot define what a woman is? Think how fast transgender propaganda has taken root in our culture that this very basic question would produce a blank stare and an “I don’t know” from a sitting judge.

A colleague pointed out to me the irony of her not being able to answer this question. After all, her presence in these hearings is the direct result of President Biden’s promise to nominate a black WOMAN to the Supreme Court. Can we be sure that Biden kept his promise if we can’t even agree on what a woman is? Can Jackson agree that Biden kept his promise? If she can, doesn’t that mean that she knows what a woman is and that presumably she is one?

I have a hunch that Judge Jackson knows what a woman is. She understands at some level that the fundamental difference between a man and a woman is the body’s organization for reproduction. A man’s reproductive capacity is ordered toward fathering, and a woman’s reproductive capacity is ordered to mothering. I suspect that she knows this at some level because it’s what everyone held to be self-evident until the day before yesterday.

Jackson’s claim that she’s not a “biologist” suggests that the truth is still self-evident to her at some level. She seems to admit that biology is at least part of the answer to the question, and yet she demurs from endorsing that reality. The problem here is that this basic structure of reality is at odds with ascendant transgender ideology, which says that being a man or a woman is entirely disconnected from biological realities but rather is rooted in what a person thinks themselves to be at any given moment. If a biological male thinks he’s a woman, then he is a woman. If a biological female thinks she’s a man, then she’s a man. Thinking makes it so! And it seems that Judge Jackson doesn’t want to confront this transgender mythology.

Our culture has sown to the wind and is now reaping the whirlwind. We thought that expressive individualism would be the path to freedom. Instead, it has trapped us under a mountain of reality-denying absurdities. It bids us to forsake nature and to bow before the almighty, autonomous, self-defining id.

The only way to escape the ambient absurdity is to resist. We have to return to the ancient wisdom about the structure of reality.

The One who creates has the right to command. He also has the right to name and define. Indeed He has written His design into every cell of our bodies. Our actual identity as male or female is not self-constructed, self-defined, or self-directed. Our identity as male and female is God-constructed, God-defined, and God-directed. Maleness or femaleness aren’t assigned at birth. Rather, they are revealed in God’s special, distinct design of male and female bodies.

The sooner we return to this wisdom, the better off will be. Until then, expect our elites to stumble and falter at answering what used to be a simple question: What is a woman?