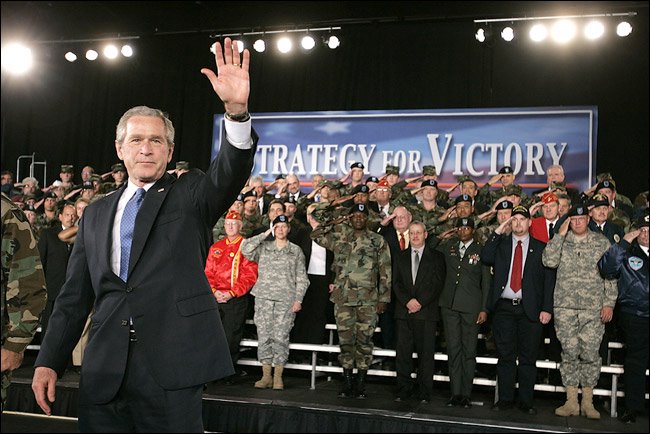 President Bush has been mute for far too long about the baseless charges being leveled at him by his political opponents. This silence has been very frustrating for those of us who have supported this presidentâ€™s war policy. The silence on his part has given the appearance that everything that the critics of the war are saying is true and that there never was any legitimate basis for the U.S.-led invasion of Iraq.

Today in a speech marking Veterans Day, the President finally decided to step up to the plate and take a whack at the unfounded allegations that his critics have made against the case he made for the Iraq War. The â€œmoney lineâ€ from the speech was the following: â€œIt is deeply irresponsible [of the Democrat critics] to rewrite the history of how that war beganâ€ (source).

I literally cheered when he said it. Finally, the President made of start of refuting the absolutely ridiculous and groundless accusation that he manipulated intelligence in order to mislead the U.S. into war. Not only did he defend his own policy, but he also drew attention to the hypocrisy of some of his loudest critics.

Many of these critics supported my opponent during the last election, who explained his position to support the resolution in the Congress this way: “When I vote to give the president of the United States the authority to use force, if necessary, to disarm Saddam Hussein, it is because I believe that a deadly arsenal of weapons of mass destruction in his hand is a threat and a grave threat to our security.” That’s why more then a hundred Democrats in the House and the Senate, who had access to the same intelligence, voted to support removing Saddam Hussein from power (source).

Of course, he is referring to John Kerry in this remark, and he is absolutely right for doing so. Somehow John Kerry got the anti-war vote in the last election, even though he himself supported the war! That so few of Kerryâ€™s anti-war supporters acknowledged the inconsistency of their position reveals that their opposition to the Presidentâ€™s policy was more about politics than their own principles. I suspect that most of the opposition today is just as unprincipled as it was in the 2004 election.

I have been complaining in this blog about the misleading revisionism that has completely dominated recent public debate about the Iraq war. Itâ€™s not just the Democrats who have been misleading the public on this point. The mainstream media have gone right along in fabricating a storyline that has no basis in fact. Bush began retelling what actually happened in todayâ€™s speech.

Some Democrats and antiwar critics are now claiming we manipulated the intelligence and misled the American people about why we went to war. These critics are fully aware that a bipartisan Senate investigation found no evidence of political pressure to change the intelligence community’s judgments related to Iraq‘s weapons programs. They also know that intelligence agencies from around the world agreed with our assessment of Saddam Hussein. They know the United Nations passed more than a dozen resolutions citing his development and possession of weapons of mass destruction.

The paragraph above is very important. Itâ€™s a reminder that the presidentâ€™s WMD argument was multi-faceted. The war wasnâ€™t based merely on U.S. intelligence estimates about Saddamâ€™s WMD. The legal premise of the war was actually based on Saddamâ€™s defiance of a string of U.N. Security Council resolutions dating back to the first Gulf War. That defiance culminated in his refusal to comply with Security Council resolution 486 in the winter of 2002. This last slap at the U.N. became the legal causus belli (see my previous post on this point). Mainstream media outlets and Democrat critics of the war regularly leave this crucial piece out of the â€œhistoryâ€ of how the war began.

I am hoping that this is the beginning of a concerted effort by the President to re-educate the American public about how we actually got into this war. For too long the only voices that people have been hearing have been the voices of dissent. The President will go a long way towards winning this war if he can recapture the hearts and minds of Americans. To do that, he will need to give many more speeches like the one he gave today.