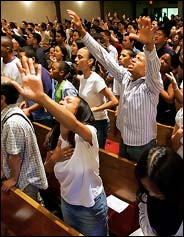 Members of the Korean American Presbyterian Church of Queens. Koreans are among those swelling the ranks of evangelical Christians. – James Estrin/The New York Times

An interesting story in todayâ€™s New York Times talks about the population of evangelicals living in New York City. So how do New Yorkers, by and large, feel about evangelicals in there midst?

â€œStill, the prevailing culture of this city is still unsure of what to make of evangelical Christians, most churchgoers interviewed agreed. They can be treated with contempt and other times curiosity. Mickey H. Sanchez, 26, who works for a city councilman and attends Redeemer Presbyterian Church, said he finds that people are often confused when they discover that he’s an evangelical. â€˜That you’re in New York as an evangelical, it has to be processed by them,â€™ he saidâ€ (source).

I guess meeting a Martian would be the only thing stranger than meeting an evangelical in New York. Still, the article discusses the burgeoning evangelical population in the city. This population is presumably going to populate the upcoming Billy Graham crusade. This is unfortunate. I think it would be better if the evangelistic crusade could actually reach some non-evangelicals. Hopefully, we havenâ€™t come to the point where seeing a Martian at the crusade would be the only thing stranger than seeing a non-evangelical there.