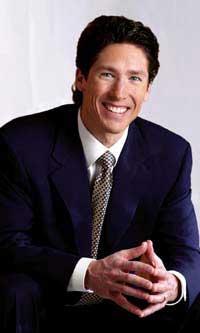 One of Larry Kingâ€™s recent interviews has been very disappointing. In this case, the interviewer is not the one disappointing me, but the interviewee, Rev. Joel Osteen. I think it is unfortunate that Osteen, having voiced his agreement with the prosperity-gospel, is still put forward as a spokesman for evangelicalism. Moreover, Osteen makes remarks that I donâ€™t know how to interpret except as a flat out rejection of the exclusivity of the Gospel message.

The following is from Larry Kingâ€™s interview with Joel Osteen. I hope that Osteen just misspoke and will retract some of this. The end is especially troubling.

OSTEEN: My message, I wanted to reach the mainstream. We’ve reached the church audience. So I just try to, what I do is just try to teach practical principles. I may not bring the scripture in until the end of my sermon and i might feel bad about that. Here’s the thought. I talked yesterday about living to give. That’s what a life should be about. I brought in at the end about some of the scriptures that talk about
that. But same principal in the book.
KING: Is it hard to lead a Christian life?
OSTEEN: I don’t think it’s that hard. To me it’s fun. We have joy and happiness. Our family — I don’t feel like that at all. I’m not trying to follow a set of rules and stuff. I’m just living my life.
KING: But you have rules, don’t you?
OSTEEN: We do have rules. But the main rule to me is to honor God with your life. To life a life of integrity. Not be selfish. You know, help others. But that’s really the essence of the Christian faith.
KING: That we live in deeds?
OSTEEN: I don’t know. What do you mean by that?
KING: Because we’ve had ministers on who said, your record don’t count. You either believe in Christ or you don’t. If you believe in Christ, you are, you are going to heaven. And if you don’t no matter what you’ve done in your life, you ain’t.
OSTEEN: Yeah, I don’t know. There’s probably a balance between. I believe you have to know Christ. But I think that if you know Christ, if you’re a believer in God, you’re going to have some good works. I think it’s a cop-out to say I’m a Christian but I don’t ever do anything…
KING: What if you’re Jewish or Muslim, you don’t accept Christ at all?
OSTEEN: You know, I’m very careful about saying who would and wouldn’t go to heaven. I don’t know…
KING: If you believe you have to believe in Christ? They’re wrong, aren’t hey?
OSTEEN: Well, I don’t know if I believe they’re wrong. I believe here’s what the Bible teaches and from the Christian faith this is what I believe. But I just think that only God with judge a person’s heart. I spent a lot of time in India with my father. I don’t know all about their religion. But I know they love God. And I don’t know. I’ve seen their sincerity. So I don’t know. I know for me, and what the Bible teaches, I want to have a relationship with Jesus.

There are many problems in this exchange, and most of the readers of this blog will spot them without my commenting upon them point by point. Yet there is one item that is particularly troubling. When Larry King asks about the destiny of sincere Muslims, Osteen will not come out and say that Jesus is the only way of Salvation. I do not understand why Osteen couldnâ€™t just quote the Bible (maybe John 14:6 or Acts 4:12)? If he canâ€™t bring himself to say it in his own words, why canâ€™t he just quote the Bible and leave it at that?

My fear is that unbelievers hearing this interview probably did not glean the truth that every person who has ever lived faces judgment because of their sin and that faith alone in the crucified and risen Christ is manâ€™s only hope of salvation. This is the heart of the Gospel, and it was not at all clear in Osteenâ€™s interview. I donâ€™t think that this man believes that there is more than one way of salvation, but the interview seems to imply that people of other faiths might be okay after all.

So I am disappointed and hoping for a retraction or perhaps some clarification. I hope one or both comes soon.