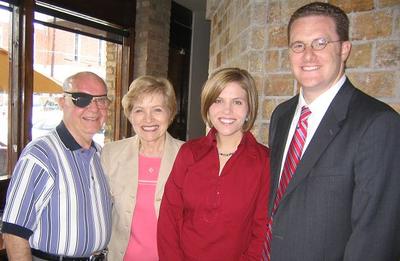 Howard Hendricks, his wife Jeanne, my wife Susan, and me at a DTS post-graduation party, May 7, 2005.

â€œHave you ever left a bible study feeling like you have your feet firmly planted in mid-air?â€ That is the question that Dr. Howard Hendricks used to ask when I was one of his Hermeneutics[1] students during my first semester at Dallas Theological Seminary. He knew, as most of the rest of us knew, how so many small-group bible studies are racked with superficiality and are â€œbible studiesâ€ in name only.

How many times had I myself sat in a bible-study circle of earnest young believers where the leader reads a text then asks the question: â€œWhat does this verse mean to you?â€ The inevitable response from the members in the circle is a cascade of ill-conceived interpretations that contradict one another, ramble into therapeutic incoherence, and ultimately miss the point of the Scripture. Then, after all had offered their version of â€œwhat this verse means to me,â€ the leader says â€œamenâ€ and closes with prayer with everyone feeling satisfied that they had shared their feelings with one another. What I learned from Dr. Hendricks is that those kinds of â€œbible studiesâ€ are less a study of the Bible than they are a haphazard pooling of everyoneâ€™s ignorance.

As I finish my third semester of teaching hermeneutics to undergraduate and graduate students, I am contemplating Dr. Hendricksâ€™ question again. It is clear to me that as long as there have been readers of the Bible, there have been disagreements over the interpretation of Scripture. This situation is due to no deficiency in the Scripture, but to the fallenness of its readers. How do we get our feet planted on the ground in our interpretation of the Bible?

For instance, the New Criticism is an example of the second approach. This mode of interpretation was popular among literary critics from the 1920â€™s to the early 1960â€™s, and it focused its attention on the text as the determiner of meaning. Meaning was thought to be a property of the text itself, quite apart from anything external to it (including the author and the reader!). If you are familiar with the work of T. S. Eliot or Robert Penn Warren, then you know a little bit about the text-focused work of the New Critics.

I recently blogged on Stanley Fish, a prominent contemporary literary theorist, who falls in the third category. He would argue that it is not the author who gives meaning to a text, but the reader.[2] Fish, who is not the originator of this point of view, is but one of many literary critics that belong to the reader-response school of interpretationâ€”â€œa group of approaches to understanding literature that have in common an emphasis on the reader’s role in the creation of the meaning of a literary work.â€ This approach is all the rage today in universities across America.

As with the New Criticism, the reader-response school of interpretation has not only affected the interpretation of biblical texts, but also the interpretation secular texts as well. Recent controversy over the role of federal judges in the intepretion of the U. S. Constitution is fundamentally a debate about who controls the meaning of texts: the author (i.e., the framers) or the readers (i.e., the judges).[3]

This is essentially the common sense approach to interpretation. When you read the words that I have written in this blog, you are trying to understand what I mean by what I say. If you were to have a conversation with me, you would try to interpret what I mean by what I say. If you try to read your own meaning into what Iâ€™m saying or writing, then there will be no way for us to communicate. You would never hear me, but only yourself. Common sense says that you should try to understand me (the author) and my intention in writing (the text) as you read (the reader).

An author-centered approach is also the one that best accords with what the Bible teaches. I could point to many texts, but let me select one: â€œBut know this first of all, that no prophecy of Scripture is a matter of one’s own interpretation, for no prophecy was ever made by an act of human will, but men moved by the Holy Spirit spoke from Godâ€ (1 Peter 1:20-21). According to this text, the authors of the Bible were given a Divine competence that enabled them to express adequately the revelation that God had given them. If you want to know what God means in the Bible, then you have to get to the bottom of what the Spirit-moved human author meant when he wrote.[5]

I say all of this so that I can encourage all of you Bible readers to plant your feet firmly on the ground of the Bible, Godâ€™s holy and infallible word. But you cannot have your feet planted firmly on the word if you are seeking to find meaning in any place other than the authorâ€™s intention. So when we are sitting in the Bible-study circle, and the leader asks, â€œWhat does this verse mean to you?â€, in love and with great patience, letâ€™s endeavor to point our brothers and sisters to find out what it meant to the author. This may throw a wrench in the stream-of-consciousness approach to Bible study that is so popular today, but it will be the only way to avoid having our feet planted firmly in mid-air.
________________________
[1]â€œHerman who?â€ is the question that many people ask when they first hear the word hermeneutics. Hermeneutics comes from the Greek word hermeneuÅ which simply means to interpret or to explain. Textual hermeneutics is the study of the principles that govern the interpretation of texts. Because preaching the biblical text is the central work of the Christian minister, a hermeneutics course is typically included in the core curriculum of seminaries and bible colleges.
[2]Stanley Fish, Is There a Text in This Class? The Authority of Interpretive Communities (London and Cambridge, Mass: Harvard University Press, 1980.
[3]On this topic, I commend to you John Piperâ€™s sermon: â€œDiscerning the Will of God Concerning Homosexuality and Marriage,â€ preached August 7, 2004 at Bethlehem Baptist Church in Minneapolis, Minnesota.
[4]This definition and indeed my whole hermeneutics course rely almost entirely on the work of Robert H. Stein, A Basic Guide to Interpreting the Bible: Playing by the Rules (Grand Rapids: Baker, 1994). Dr. Stein was a great mentor to me when I worked as his graduate assistant at Southern Seminary. Other significant influences include: E. D. Hirsch, Validity in Interpretation (Yale University Press, 1979); Kevin J. Vanhoozer, Is There a Meaning in This Text?: The Bible, the Reader, and the Morality of Literary Knowledge (Zondervan, 1998).
[5]There is much to be said here about the issue of Sensus Plenoir, but I shall refrain for the sake of space.