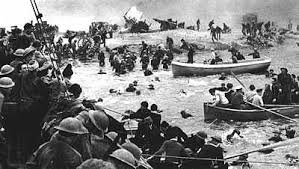 This week marks the 70th anniversary of the great rescue at Dunkirk. On May 27, 1940, the British army had fallen back to the beaches of Dunkirk in the north of France. In front of them was the German army, and behind them was the sea. These British soldiers and their French allies were the last line of defense between England and Hitler, and they were about to be crushed. There were over 300,000 of them trapped on the beach.

What happened next is the stuff of legend. Some say it was nothing short of a miracle. In his biography of Winston Churchill, William Manchester narrates it best:

‘The French had collapsed. The Dutch had been overwhelmed. The Belgians had surrendered. The British army, trapped, fought free and fell back toward the Channel ports, converging on a fishing town whose name was then spelled Dunkerque.

‘Behind them lay the sea.

‘It was England’s greatest crisis since the Norman conquest, vaster than those precipitated by Philip II’s Spanish Armada, Louis XIV’s triumphant armies, or Napoleon’s invasion barges massed at Boulogne. This time Britain stood alone. If the Germans crossed the Channel and established uncontested beachheads, all would be lost…

‘Now the 220,000 Tommies at Dunkirk, Britain’s only hope, seemed doomed. On the Flanders beaches they stood around in angular, existential attitudes, like dim purgatorial souls awaiting disposition. There appeared to be no way to bring more than a handful of them home. The Royal Navy’s vessels were inadequate. King George VI has been told that they would be lucky to save 17,000. The House of Commons was warned to prepare for “hard and heavy tidings.” Then, from the streams and estuaries of Kent and Dover, a strange fleet appeared: trawlers and tugs, scows and fishing sloops, lifeboats and pleasure crafts, smacks and coasters; the island ferry Gracie Fields; Tom Sopwith’s America’s Cup challenger Endeavour; even the London fire brigade’s fire-float Massey Shaw—all of them manned by civilian volunteers: English fathers, sailing to rescue England’s exhausted, bleeding sons.’

When it was all said and done, this rag-tag armada of leisure crafts and fishing boats evacuated 338,226 soldiers (198,229 British and 139,997 French). It was one of the most impressive escapes in history, and it enabled the Allies to fight another day. And fight they did. When the Allies returned to the northern beaches of France on June 6, 1944, the tide was about to turn.

What Is a Woman?