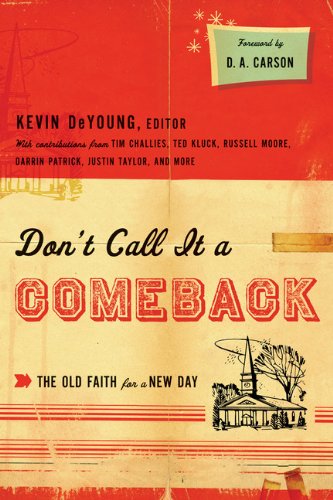 We live in a day in which many people have written off evangelical faith. The notion that Christian truth might still be relevant or viable in 2011 seems a far-fetched idea to many in our culture. Nevertheless, God raises up in every generation a people who live and preach otherwise. Civilizations come and go, but the truth of the gospel remains.

That is why I am grateful to have contributed to a recent book that reaffirms the essentials of the evangelical faith, Don’t Call It a Comeback: The Old Faith for a New Day (edited by Kevin DeYoung). The title of the book is a riff on the lyrics of a rap-song from the late 80’s. What could this rap possibly have to do with Christian theology? In 1990, many people thought that LL Cool J was past his prime and irrelevant as an entertainer. That year he released a song that changed everyone’s opinion. The first lines of the song were, “Don’t call it a comeback. I’ve been here for years.” The album went on to sell over 2 million copies and to win a Grammy. The rest is history. Everyone has since acknowledged that this particular performer was written off far too soon. Likewise, evangelical faith isn’t making a comeback. It’s been here all along.

In this book, several younger evangelical leaders have come together to outline the basics of the evangelical faith. The editor, Kevin DeYoung, writes that the book has two main aims:

“The first aim is to introduce young Christians, new Christians, and underdiscipled Christians to the most important articles of our faith and what it looks like to live out this faith in real life. . . The second aim of the book is to reassert the theological nature of evangelicalism.”

I think this book would be useful to any person old or young who desires to be introduced to the fundamentals of evangelical faith. For this reason, I agree with D. A. Carson’s assessment: “I hope and pray that many Christians will buy multiple copies of the book so as to distribute it with generous abandon” (p. 14).

Here are a couple more endorsements:

“I absolutely love this book! First, each chapter solidly tackles a critical component of our Evangelical faith and practice. Second, the authors demonstrate not only a strong grasp of God’s Word, but also of the perspective of church history, which is sadly lacking in most contemporary books. Third, these guys write tight, making every sentence count, so even though it packed with truth, the book is a quick read. I am so proud of these brilliant, godly men.”
â€”Rick Warren, Pastor, Saddleback Church

“It brings this aging man great joy to see a rising generation address contemporary questions with theologically informed answers. These are the right guys, on the right topics, at the right time.”
â€”C. J. Mahaney, Sovereign Grace Ministries