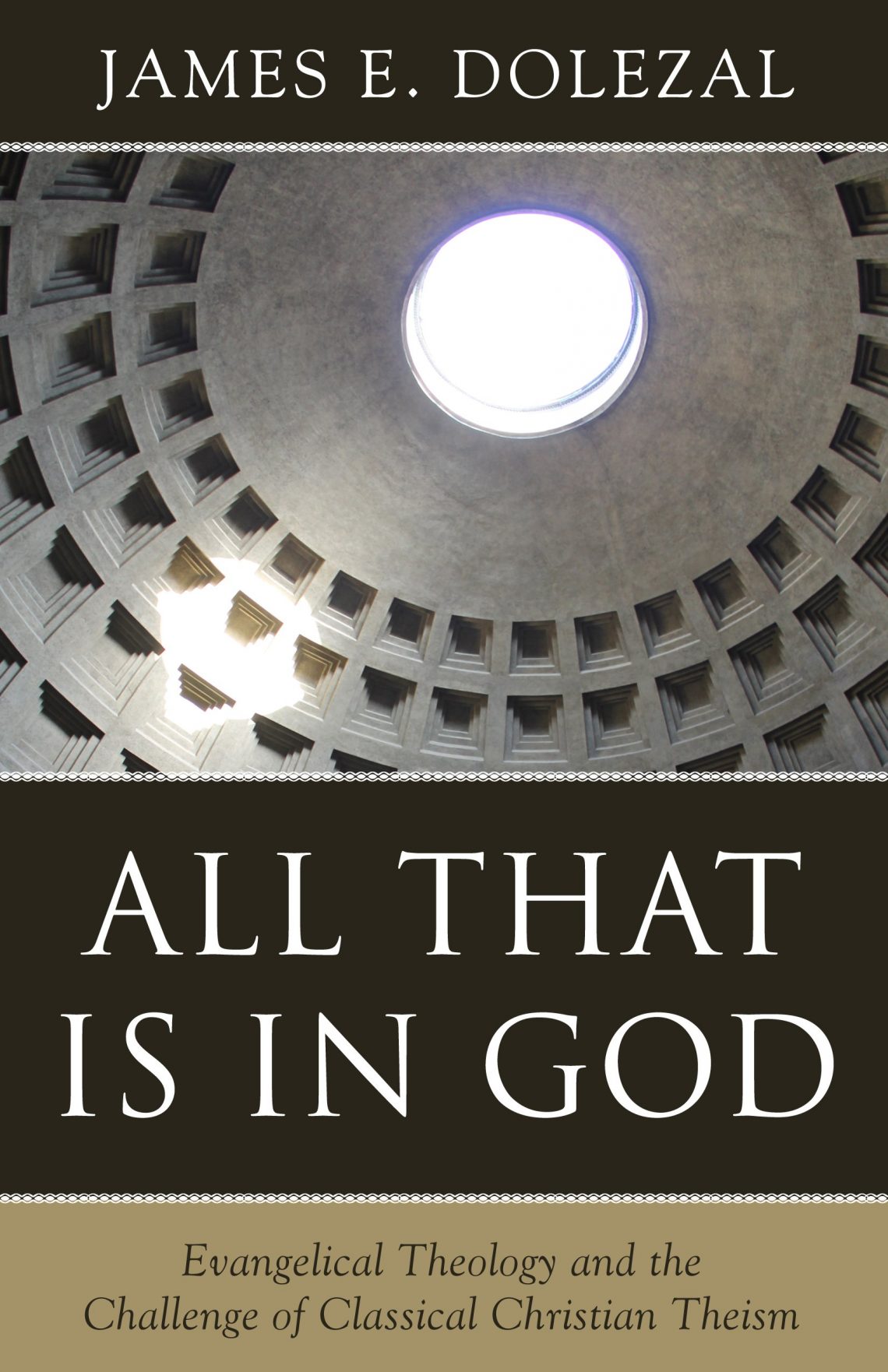 I really wish I had not waited as long as I did to read James Dolezal’s 2017 book All That Is in God: Evangelical Theology and the Challenge of Classical Christian Theism (Reformation Heritage, 2017). As it is, I only picked it up a month or so ago, but I would have picked it up much sooner if I had realized what an important book this is. It’s only 137 pages, but it is without question one of the most significant books that I have ever read. I don’t agree with everything in this book. In fact, there are parts of it that I found quite frustrating. Nevertheless, the main thesis of this book is one that needs to seep down into every nook and cranny of evangelical theology.

Why This Book Is Important

Dolezal’s basic contention is that classical Christian theism has practically disappeared from many quarters of evangelical theology. For Dolezal, classical Christian theism is “marked by a strong commitment to the doctrines of divine aseity, immutability, impassibility, simplicity, eternity, and the substantial unity of the divine persons” (p. 1). These are doctrines that are the bedrock of the Great Tradition and even of the older Protestant confessions (e.g., Belgic Confession, Thirty Nine-Articles of Religion, Westminster Confession of Faith, and Second London Confession of Faith).

Dolezal argues that current evangelical theology is often bereft of the doctrine of God reflected in this tradition. Modernity has eaten through it like a universal acid with the result that many evangelical theologians look askance at basic doctrines that were once considered the foundation for every major tradition of Christian theology. Instead evangelicals have embraced a perspective that Dolezal labels as “theistic mutualism.” Theistic mutualism teaches that God exists in a give-and-take relationship with his creatures in such a way that involves God’s very essence. Dolezal argues that theistic mutualism isn’t merely the perspective of process theologians but also of many evangelical Calvinists. He writes,

“Many [evangelical Calvinists] share with open and process theists the theistic mutualism belief that God’s being is such that He is capable of being moved by His creatures… Confessional Calvinists who uphold any aspect of theistic mutualism are faced with the peculiar and perhaps insurmountable challenge of reconciling their mutualist understanding of the God-world relation with the language and intent of the classical Reformed creeds” (p. 3).

There are so many errors that flow downstream from the failure to comprehend this basic point about God’s nature and being. And it is for this reason that this book and its thesis are so important. Personally, I can see this lacuna not only in the current evangelical landscape. I also see it in my own formal theological training. Much of it simply did not lay this basic groundwork of the faith. I am not blaming anyone for this or saying that my experience was uniquely egregious. I think Dolezal is correct that this is a pervasive problem across the spectrum of evangelical theology, and it needs correcting. Even the 2016 trinity debate is understood more clearly as a consequence, in many ways, of the problems that Dolezal outlines in this book.

Dolezal’s Treatment of Those He Disagrees With

Even though I have high praise for this book, there are at least two items that I found problematic with it. The first one is this. Dolezal sometimes fails to deal accurately with certain evangelical theologians. He singles out a long list of heavyweights including John Frame, Kevin Vanhoozer, D. A. Carson, Charles Hodge, J. I. Packer, Alvin Plantinga, Bruce Ware, Wayne Grudem, and many others. According to Dolezal, all these theologians display tendencies to theistic mutualism.

Sometimes, however, Dolezal treats diverse theologians as if they are the same. For example, Vanhoozer says things in a way that is unique to Vanhoozer, but his Remythologizing Theology represents a very classic view of God. Dolezal simply reads Vanhoozer in a way that distorts what he is saying. Perhaps one could argue that Frame could be more careful with his language, but Frame is hardly in the same camp as Alvin Plantinga or process thought. Those whom Dolezal labels as theistic mutualists are actually a diverse lot, but sometimes that fact gets lost in this analysis.

I’m not saying that Dolezal’s critiques are all off-base. Nevertheless, sometimes Dolezal describes other theologians’ views in ways they themselves would not recognize. For example, Dolezal argues that Bruce Ware has denied the doctrine of God’s simplicity, not in so many words but as a necessary consequence of Ware’s description of how God’s emotions appear to change. Dolezal writes,

“We might rightly conclude, then, that for Ware the reality of God’s so-called dispositions or attitudes is an actuality of being in Him that is not identical with His divine essence or nature as such. They cannot be aspects of His nature since Ware insists that these realities change, while the divine nature cannot” (pp. 65-66).

The problem with this sentence is that Dolezal accuses Ware of an implication that Ware explicitly denies, and Dolezal makes the claim even after quoting Ware’s denial of the alleged implication. As Ware himself says, “no such change affects in the slightest the unchangeable supremacy of his intrinsic nature” (quoting Ware on p. 65). In an extended footnote, Dolezal concedes, “Ware affirms the ontological immutability of the divine nature” (p. 66, n.7). Given Ware’s own qualifications, Dolezal would have done better to allege an inconsistency rather than an outright rejection of God’s impassibility. Dolezal’s critique in this regard might have been read as ordinary theological polemics except that he has raised the stakes really high in this book. He writes, “No less than true religion is at stake in the contest between theistic mutualism and classical Christian theism” (p. 104).

My complaint is not that Dolezal probes what he perceives to be inconsistencies in other theologians’ views. My complaint is that Dolezal sometimes suggests that a theologian has embraced an implication that the theologian has explicitly denied. Dolezal is guilty of this not only with Ware but also with John Frame (p. 72), Rob Lister (p. 92), and others. I think some of the problem here has to do with Dolezal’s ungenerous reading of “God-talk” in the writings of other theologians. Dolezal acknowledges that our language about God is not univocal, but then he often accuses other theologians of only speaking univocally about God. I don’t know why he makes this ungracious assumption over and over again in this book (e.g, pp. 77-78). It is not necessary to the very important work of recovery that he is pursuing in this work. And it overlooks the fact that many of the theologians he critiques are well aware that our language about God is not univocal.

Frame, for example, wishes to speak as the Bible speaks even as he understands the Bible’s language analogically. Yet Dolezal seems to “literalize” Frame’s “God-talk” in a way that Frame himself would not accept. We all wrestle with the limitations of creaturely language, especially when the subject matter is God. And yet we know that God has revealed Himself to us in creaturely language. To use the words of Calvin, God lisps for us (Institutes 1.13.1).

And that leads me to my second complaint about this book. Dolezal makes statements that make real problems not only for our talk about God but also for the doctrine of Scripture itself, and they are problems that he leaves unresolved. Dolezal argues that one of the leading motives for theistic mutualist departures from divine simplicity is the limitations of creaturely language about God (p. 60). Human language is generally a reliable guide to the nature of created reality (p. 59), but it is not a reliable guide in our talk about God (p. 60). Dolezal writes,

“We cannot discover the manner of God’s being by attempting to read it off the surface grammar of our propositions about Him. The shape of our propositional statements is only suited to correspond in a one-to-one manner to multipart and composite beings” (p. 60).

This statement is uncontroversial in my view, and it is precisely why we all acknowledge that our language about God cannot be univocal. As Dolezal writes, “A simple God is not composed of parts; thus, His being cannot be directly mapped onto any multipart statements we make about Him” (p. 60). The key qualifying term here is “directly.” But sometimes Dolezal seems to lose this qualification.

Dolezal sometimes comes across as despairing of language altogether as a reliable guide to understanding God’s essence. He writes, “Our ordinary creaturely patterns of speech (e.g., subject + predicate) do not quite fit God in the way that they fit creatures” (p. 59). I think this observation is why Dolezal is quick to criticize other theologians. He sees them writing sentences that use subjects and predicates to describe God, and He quickly alleges that they are using language univocally to describe God’s being. But what if that is not what they are doing? What if they are simply making propositions about God that are similar to what we find in scripture?

And this is the big problem that Dolezal leaves unresolved in my view. It is not just that he has a low view of language. He sometimes writes as if our language is not adequate to communicate accurately to us about God’s being. For example,

“If we are to faithfully preserve the infinite and unsurpassable glory of God’s being, we will have to recover the older commitment to divine simplicity and the incomprehensibility of God and forsake the misguided path of thinking that our thought or language adequately computes the mysterious manner of God’s existence” (p. 78).

I do not deny that God’s being surpasses our ability to describe or comprehend completely, but I think it is a big problem to suggest that our language is not adequate to communicate true things to us about God. Dolezal criticizes John Frame on these grounds, “Frame has great confidence in the ability of human thought and language to adequately represent the being of God” (p. 72). Does Dolezal disagree with Frame on this? If he does, does he see how this implies an indictment of the propositions of scripture itself? I am certain that Dolezal would object to such an implication, but he would have done well to explain how such an implication does not necessarily follow from his argument.

And this is the problem that I felt was left unresolved at the end of this book. Dolezal is correct to deny that our language about God is univocal. I think he is incorrect to deny that our language is adequate to describe true things about God. We should not blush about the manner of God’s revelation to us in the Scriptures. Likewise, we should not blush to speak about God in the way that scripture does. But Dolezal seems to censure such speech as evidence of theistic mutualism. I think this is problematic and often prejudicial. Dolezal tends to privilege theological discourse at the expense of biblical discourse, but our real task is to bring both together.

I’ve gone on at length about two problems that I found with this book, but I do not wish for that to undermine what I said at the outset. The strengths of this work far outweigh any shortcomings that I may have identified here. This is a really important book that needs to be widely read and considered. We do need a recovery of classical Christian theism in evangelical theology, and this book is a great resource spurring us on to that end.