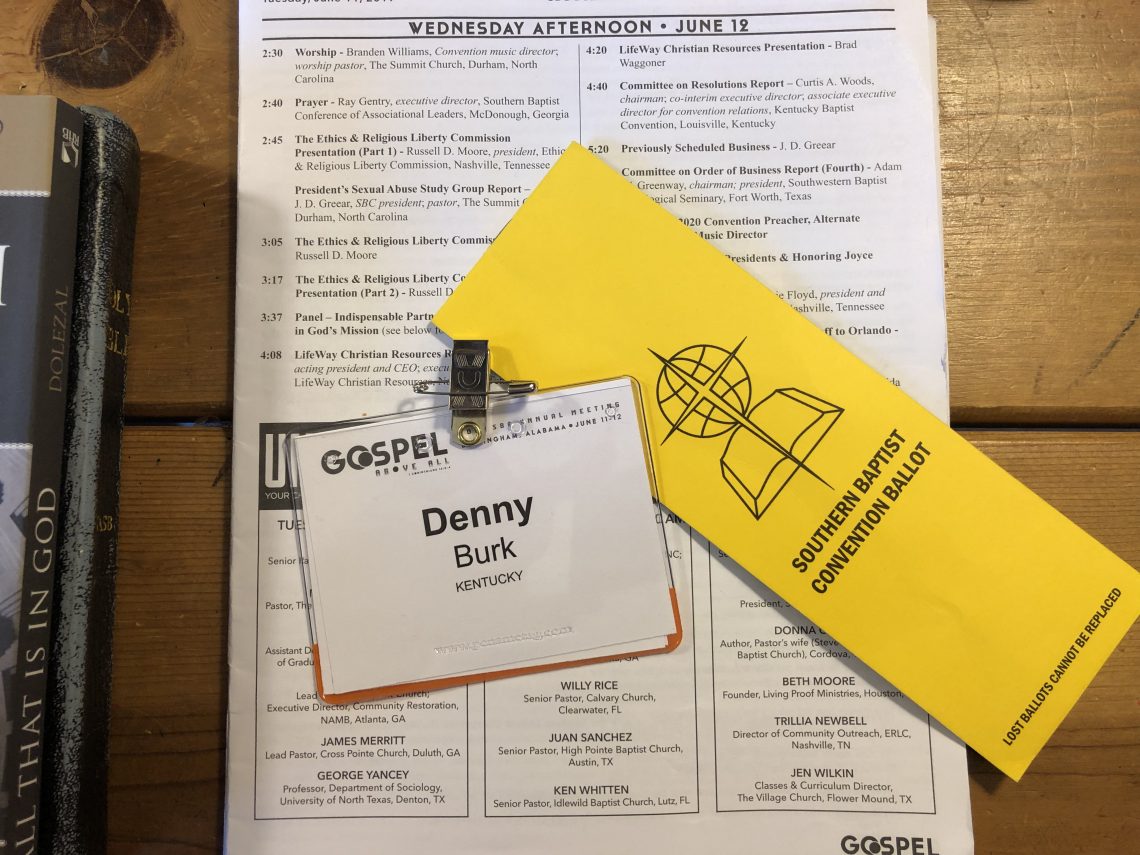 I am pre-registered as a messenger from my church to the Southern Baptist Convention in Nashville next month. Because of the aftermath of 2019’s infamous “Resolution 9,” one of the most important items of business before the Convention will no doubt be a resolution relating to Critical Race Theory (CRT). I am not a prophet nor the son of a prophet. So I could be wildly off in this prediction, but I anticipate that we won’t leave Nashville without a strong resolution against Critical Race Theory.

I won’t even try to predict the path from point A to point B, but I’m pretty sure we’re going to get to point B. Even if there were resistance on the platform (which I’m not anticipating or predicting), the floor would challenge, and the floor would win. Decisively. Again, if I’m wrong, you all can say so, and I’ll eat crow. But I think we are getting to point B one way or the other.

Having said that, I am aware that a number of people have submitted resolutions relating to CRT. I know of at least three that are opposed to CRT (here, here, and here) and one that is in favor of CRT (here). As I write this, it looks like there are about 57 people submitting the exact same resolution as Mike Stone’s proposed resolution. And these are just the ones I know about because they’ve been publicized on the internet. I have heard through the grapevine that there are other proposals that haven’t been publicized and that we won’t know about until the Resolutions Committee reports on them at the convention. This means that the committee is not going to be able to please all sides and likely won’t try to. It also means that they have their work cut out for them.

One of the big criticisms of 2019’s Resolution 9 is that the Resolutions Committee transformed an anti-CRT proposal into a pro-CRT resolution. Because of this, no one should be surprised that many messengers will have increased scrutiny of how the committee actually disposes of the CRT resolutions this year. The folks on the committee have their work cut out for them because this time they aren’t dealing with one resolution but with many. Every messenger needs to be prepared for the reality that the Resolutions Committee is going to have a lot of editing, consolidating, and/or writing to do before coming up with a final product to present to messengers. There is nothing necessarily nefarious about that. It has to be the case because of the sheer number of proposals they are dealing with. Pray for them.

I have heard of at least one effort to rescind 2019’s Resolution 9. If that came to the floor of the convention, I would support it, but I’m not sure if it’s possible under the rules (someone else who knows more about Robert’s Rules can weigh-in). But I’m also not sure that it’s even necessary. If the convention passes a strong resolution against CRT, it would serve as a de facto rescinding of Resolution 9 (sort of like subsequent resolutions became a de facto repudiation of the SBC’s infamous pro-choice resolution of 1971). For me, the priority is getting a strong statement against CRT. That is the main thing.

Just this morning, I saw one such proposed resolution that has been endorsed by Neil Shenvi. I gave it a quick read, and I think I agree with all of it. One distinctive feature of this resolution is how technical and precise it is. That may or may not appeal to messengers, who may not want to get too deep in the weeds and might prefer something more direct and tailored to the layman (like Stone’s proposal). In any case, I like this approach (but would be prepared to vote for either), and I hope it is given strong consideration by the committee.

This resolution is superior to Resolution 9 in that it offers a more direct and sustained critique of CRT. It’s also superior in the way that it addresses the issue of perceived “insights” within CRT. Resolution 9 commended CRT as an “analytical tool,” which I think has proven to be problematic. This proposal goes in a different direction and says this:

WHEREAS, scholars employing critical race theory and intersectionality do sometimes offer accurate explanations of how race has and continues to function in society or how different facets of identity intersect and interact to inform and affect one’s experience; and

WHEREAS, the biblical doctrine of general revelation accounts for the fact that truth can sometimes be found embedded in false and unbiblical ideologies, which is part of God’s common grace, and thus any accurate insights from critical race theory and intersectionality could be derived independently of them; and

What I like about this is that it recognizes that whatever “insights” one might find in CRT, we don’t need CRT for those insights. Why? Because they are available to everyone via general revelation. In other words, God’s revelation is sufficient. This language recognizes the possibility of insights without committing wholesale to the worldview. CRT as an “analytical tool” was widely criticized as being too beholden to the CRT worldview, and this new proposal remedies that shortcoming without going too far.

I also appreciate that this resolution deals with the category of “systemic racism” in a way that is congruous with the SBC’s 1995 resolution on racial reconciliation. The proposal says this:

RESOLVED, That while we denounce any faulty assumptions and/or claims of critical race theory and intersectionality, we do not deny that institutional racism (defined as explicit laws or unwritten policies which encourage racial discrimination) can exist, and that ethnic, gender, and cultural distinctions have at times been egregiously weaponized to oppress and marginalize certain groups and constituencies which greatly grieves the Spirit of God and must be denounced and rejected by all who name the name of Christ…

What I like about this is that it defines “institutional racism” not as CRT does, but in terms of willful discrimination. In CRT, no human agency is required at all for racism to be present in a given institution or system (as I have written about here). CRT says that racism is everywhere all the time and that all white people are racists whether they choose to be or not. Any racially disparate outcome is racism even if no one willfully discriminated against anyone. This is completely incompatible with what scripture teaches about sin and judgment, but this resolution fixes that. It recognizes that sinful partiality can affect institutions and systems while not alleging that all institutions and systems are racist by default (as in CRT).

This is just an example of precision in a resolution that I just saw this morning. There are other good resolutions as well that I would support. Whether the convention prefers the one above or a simpler one makes no difference to me. I could go with either.

The SBC is only a couple weeks away. We will have much before us, but a resolution on CRT will be an important part of what we do. I am going to be praying that Southern Baptists rise to the moment with truth and grace. I hope you will pray too.