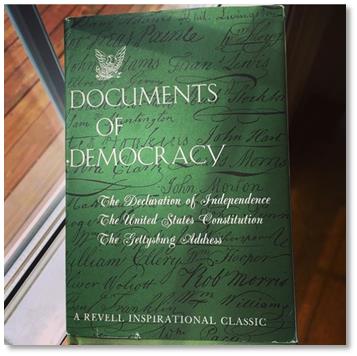 It is hard to imagine that July 4, 1776 was anything but bittersweet for the men who signed the Declaration. They knew the principles they were standing for, and they knew what it would cost them to stand: “With a firm reliance on the protection of divine Providence, we mutually pledge to each other our Lives, our Fortunes and our sacred Honor.” It would cost them all of that and more.

On July 4, 2016, two-hundred and forty years hence, we find ourselves at another bittersweet moment. Our nation desperately needs leaders and statesmen to stand for principle and to be willing to do so at great personal cost. Where are those leaders?

There is a great line in the third verse of the National Anthem:

O! thus be it ever, when freemen shall stand
Between their loved homes and the war’s desolation.
Blest with vict’ry and peace, may the Heav’n rescued land
Praise the Power that hath made and preserved us a nation!
Then conquer we must, when our cause it is just,
And this be our motto: ‘In God is our trust.’
And the star-spangled banner in triumph shall wave
O’er the land of the free and the home of the brave!

This verse is about wartime, but there is a lesson in it for our own time. If ever our nation needed free men to stand, it is now. Where are they? Where are the leaders willing to put virtue and statesmanship above party and self-interest? Where is the citizenry willing to demand such qualifications from her leaders? In 2016, we seem to have neither the supply nor the demand. And that is our predicament. These leaders aren’t forthcoming, nor is the nation demanding them. That says something not just about our leaders but about us.

Freedom calls forth sacrifice. The nation needs “freemen” to stand between the “loved homes” and the “desolation” that inevitably follows a loss of virtue. This loss is certainly reflected in the alternatives before us in the 2016 presidential election. But it is also reflected in countless other ways in our national life and popular culture. Americans are much more fond of keeping up with the Kardashians than in preserving their Republic. That is just where we are.

As a result, so much of what has made this nation great over two centuries is slipping away from us. Our political institutions writ large have begun to reflect the malaise and dissipation of the citizenry. As a nation, we seem to be turning a page. So yes, bittersweet.

What does patriotism even look like among a citizenry forgetful of their own first principles? We live among a people who can hardly imagine why the first freedom listed in the Bill of Rights is even a big deal anymore. Religious freedom has become the latest casualty of a sexual revolution that is still in the midst of an epic revolt. How do we celebrate?

The only way I know how is to do it is to go back to first principles. For me, that means a few things:

(1) Realizing that God is still running the show. “All the inhabitants of the earth are accounted as nothing, and he does according to his will among the host of heaven and among the inhabitants of the earth; and none can stay his hand or say to him, ‘What have you done?'” (Dan. 4:35). “Our God is in the heavens; He does whatever He pleases” (Ps. 115:3). Nations come and go at the sovereign ordination of God. So it is a day for giving thanks to God for his grace thus far and also for asking for his mercy going forward (Hab. 3:2).

(2) A grim determination to stand for principle even if it is costly. It is difficult to see the need for such resolve if you’re the type that puts scare quotes around “religious liberty.” But for those with eyes to see, we know the conflict is upon is. It is true, that we “have not yet resisted to the point of shedding blood” (Heb. 12:4). But that day may soon come. In the meantime, there will be the shedding of occupation, social privilege, and more. Some are already losing these things. They will not be the last.

(3) Celebrating the founding principles and not their modern erosion. This is what Martin Luther King, Jr. taught us in his famous line, “I have a dream that one day this nation will rise up and live out the true meaning of its creed: ‘We hold these truths to be self-evident, that all men are created equal.'” Dr. King dreamed not about present failures but about founding principle as it is inscribed in the Declaration. We would do well to do the same. That means that we have to know the ideals that we are founded on. A good place to start is with the charters of freedom: the Declaration of Independence, the Constitution, and the Bill of Rights. My copy is pictured above, and I read it on July 4. I hope you will too.

(4) Resist. And do so like David French urges. And do it joyfully with the courage of our convictions.

For those of us who love our country and the good it has stood for, patriotism means celebrating a heritage handed down to us by a smiling providence. But we also know that this great experiment in ordered liberty can be a tenuous thing. That is why Benjamin Franklin defined our system of government as “A Republic, if you can keep it.” So I will be praying that we can keep it a little while longer. We don’t deserve it. But then we never did, did we?

Can a true Christian lack assurance of salvation?