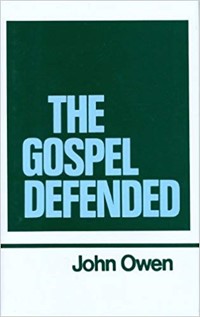 A couple months ago, I wrote “A Clarification about a New Book on the Trinity” in which I addressed criticism of an article I wrote back in 2004. In my article, I had argued that the Son’s submission to the Father is a feature of the economy not of the immanent trinity. I based this conclusion on a certain reading of Philippians 2:6, which gives us a Pauline depiction of the preincarnate Christ.

Paul says that “although [Christ] existed in the form of God, he did not regard equality with God as a thing to be grasped for” (Phil. 2:6, my translation). The point was not that the Son’s essence or will had become separate from the Father’s. The Son’s submission was “functional,” which I understood to refer to the Son’s mission in the economy. I believed that the economy in some sense commenced in eternity with this agreement between the Father and the Son.

If the exegesis in my article is correct, then it would give evidence for some sort of preincarnate agreement between Father and Son. I didn’t have the words for it then, but I think this exegesis would give scriptural evidence for what theologians call the pactum salutis or the covenant of redemption.

This morning I was reading through John Owen’s exposition of the pactum in Vindiciae Evangelicae (see Volume 12 of “The Works of John Owen,” pp. 496-508), and I discovered that his reading Philippians 2:6-8 is very similar to mine in that he sees evidence of the pactum in this particular text. Owen argues that there was a “voluntary concurrence and distinct consent of the Father and Son” within the pactum in order to accomplish our redemption.

It is under number one that Philippians 2:6 comes into play. Owen writes:

Phil. ii. 6, 7, “Being in the form of God, and equal with God, he made himself of no reputation, but took upon him the form of a servant, and was made in the likeness of men,” or made a man. He did it upon his Father’s prescription, and in pursuit of what God required at his hands (p. 503).

The Father prescribes and the preincarnate Son consents to this arrangement. Owen elaborates:

Hence the apostle tells us that this mind was in him, that whereas he was “in the form of God, he humbled himself to the death of the cross,” Phil. ii. 6-8. And so, by his own voluntary consent, he came under the law of the mediator; which afterward, as he would not, so he could not decline (p. 505).

Again, the Son’s consent to that which the Father requires occurs in the eternal covenant of redemption prior to the incarnation.

Notice that Owen speaks of the “distinct persons” and of their “distinct consent” within the covenant of redemption. It is this kind of language that has led critics of the pactum to say that the doctrine necessarily posits different centers of consciousness or distinct wills in the one God, which would then imply the heresy of tritheism.

For example, Karl Barth says that the pactum divides the “Triune Godhead” into “two distinct subjects” (p. 121). Robert Letham argues that the doctrine “opens the door to heresy” because it divides the singular divine will of God and amounts to tritheism. Letham writes:

But Owen is clear that such criticisms do not apply to his construal of the divine will. Owen offers a perfectly orthodox rendering the pactum’s relationship to the divine will. For clarity’s sake, it is worth quoting Owen at length:

Thus, though this covenant be eternal, and the object of it be that which might not have been, and so it hath the nature of the residue of God’s decrees in these regards, yet because of this distinct acting of the will of the Father and the will of the Son with regard to each other, it is more than a decree, and hath the proper nature of a covenant or compact. Hence, form the moment of it (I speak not of time), there is a new habitude of will in the Father and Son towards each other that is not in them essentially; I call it new, as being in God freely, not naturally. And hence was the salvation of men before the incarnation, by the undertaking, mediation, and death of Christ (p. 497).

In this formulation, does the Son submit to the Father in the pactum? Yes, he does. Does the Son’s consent to the Father’s will occur in eternity? Yes, it does. Does this consent to the Father’s will erase the unity of the divine will? No, it does not. Does the Son’s willing submission replace the relations of origin? No, it does not. The relations of origin remain the ground of personal distinctions within the immanent Trinity. Nevertheless, the one divine will may be “considered distinctly” as the will of the Father and the will of the Son. The single divine will subsists in a tripersonal manner, and that is what Owen has in view here. Thus we have what Scott Swain calls “the Son’s willing submission to the Father in the pactum salutis.“1 Thus the economy commences in eternity within the covenant of redemption.

If there is a sense in which Trinitarians might speak of the preincarnate son’s submission to the Father, I think this is the way to do it. John Owen is a faithful guide in helping us to put this together in a way that is faithful to scripture and that is consistent with the Nicene tradition. The pactum is the key to understanding how the Father and Son consent together in an eternal “compact.” According to Owen, Philippians 2:6-7 is an important proof for this crucial doctrine, and I think he’s right.

1 Scott Swain, “Covenant of Redemption” in Christian Dogmatics, ed. Michael Allen and Scott Swain (Grand Rapids: Baker, 2016), 122: “When it comes to the relationship between the pactum salutis and the divine will, we must consider not only that will’s unity, but we must also consider that will’s tripersonal manner of subsistence if we are to appreciate the doctrine’s status as an instance of orthodox Trinitarian reasoning.”

UPDATE (8/15/19): I just discovered that Matthew Barrett has some helpful material on John Owen, the trinity, and the pactum. Barrett writes:

“It is an example of how one can affirm eternal generation, one will in the triune God, two wills in Christ incarnate, no ontological inferiority in the Son, yet simultaneously make sense out of the Son obeying the Father’s eternal covenant with regards to the economic work of the Trinity. If only those debating the Trinity would imitate Owen’s careful, precise, nuanced, and properly balanced theological argument.”

How To Turn Complementarians into Egalitarians