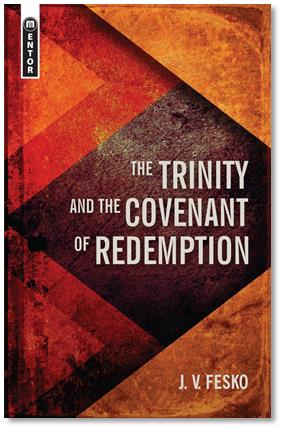 Book Notice: For those of you following recent discussions about the Trinity, you may remember that I have been pointing to the covenant of redemption (a.k.a. pactum salutis) as a potential rallying point for those on opposite sides of the trinity debate. In that connection, I recently recommended J. V. Fesko’s 2016 book: The Covenant of Redemption: Origins, Development, and Reception, Reformed Historical Theology. In addition to that book, I would also recommend Fesko’s newest work:

Whereas Fesko’s earlier book is a scholarly history of the doctrine, this most recent book is a work of constructive dogmatics. Fesko is attempting to reassert and expound a long-neglected biblical doctrine. Fesko defines the pactum this way:

Fesko labors to show that this eternal intra-trinitarian agreement is not at odds with orthodox Nicene trinitarianism. Even though the pactum has been rejected by Barth and Letham as inherently tritheistic, Fesko shows that this doctrine does not entail such an error.

Fesko specifically answers the objection that the pactum denies the single will of God and inseparable operations. He shows that such denials are not and have never been necessary entailments of the pactum. He also explains how the the preincarnate submission of the Son to the Father fits within a consistent Nicene view.

Fesko argues that the Son’s obedience is rooted in his divine mission, which is entailed by his generation from the Father, though not identical with that generation. In other words, the obedience of the Son is rooted in the economy of redemption which commences in eternity in the pactum. His submission is a part of God’s “contingent economy,” not of His “necessary existence” (p. 168). Both “love” and “obedience” mark the covenant of redemption, and “this father-son covenantal pattern did not emerge within redemptive history, but in eternity within the intra-trinitarian covenant” (p. 189).

Fred Sanders has referred to the covenant of redemption as “theological gasketry”—a way of bringing the biblical data together into a Nicene whole. I agree with him on that, and Fesko’s work is demonstration of how that can be done. That is why Fesko’s book is a must-read for those following recent discussions and who wish to see this debate through to unity in biblical truth about the Trinity.