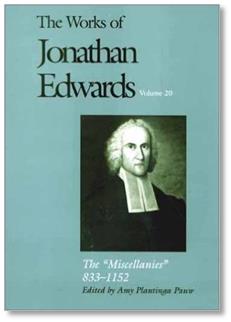 Last week, I noted Scott Swain’s chapter about the Son’s willing submission to the Father within the covenant of redemption. I’ve been doing some further reading on this, and it turns out that intratrinitarian relations with respect to the pactum have been a perennial discussion among reformed divines.

For example, Jonathan Edwards has a fascinating essay in his “Miscellanies” about “The Economy of the Trinity and Covenant of Redemption.” The entire thing is about 6,300 words, but it is worth the effort to read it if you have the time.

The economy of the persons of the Trinity, establishing that order of their acting that is agreeable to the order of their subsisting, is entirely diverse from the covenant of redemption, and prior to it…

The Father, who determines whether a redemption shall be allowed or no, acts as the head of the society of the Trinity, and in the capacity of supreme Lord, and one that sustains the dignity and maintains the rights of the Godhead antecedently to the covenant of redemption; and consequently that that economy, by which he stands in this capacity, is prior to that covenant…

Nothing is more plain from Scripture [than] that the Father chooses the person that shall be the Redeemer, and appoints him, and that the Son has his authority in his office wholly from him, which makes it evident that that economy, by which the Father is head of the Trinity, is prior to the covenant of redemption. For he acts as such in the very making of that covenant, in choosing the person of the Redeemer to be covenanted with about that work. The Father is head of the Trinity, and is invested with a right to act as such before the Son is invested with the office of a mediator, because the Father, in the exercise of his headship, invests the Son with that office. By which it is evident that that establishment, by which the Father is invested with his character as head of the Trinity, precedes that which invests the Son with his character of mediator, and therefore precedes the covenant of redemption, which is the establishment that invests the Son with that character (WJE 20:433-34).

Additionally, Edwards contends that 1 Corinthians 15:28 teaches that the Father’s headship in the Trinity continues even after the consummation. For Edwards, that is evidence that this economy of relation in eternity future is simply a reflection of what was true of the Trinity before the pactum.

If I’m reading Edwards correctly, this relation is a part of the economy.  Nevertheless, this economy is prior to both the incarnation and the pactum. That means that the Father’s role as head of the Trinity defines His relationship to the pre-incarnate Son in eternity past.

UPDATE: Mike Bird has requested Edwards scholars to weigh-in on this.

Indeed, I would love for Edwards scholars to speak into this with their expertise. Amy Plantinga Pauw is the editor of the volume in the Yale edition in which this essay appears. She has written a separate book on Edwards’s trinitarian theology, and she comments specifically on this essay. She writes:

Because of the fittingness he perceived between the immanent Trinity and God’s work of redemption, Edwards refused to follow Ridgely in locating the Son’s subordination to the Father in the temporal reality of the incarnation. There had to be an eternal fittingness to the Son’s role in the work of redemption, yet one that did not compromise his ‘equal essential glory.’

–Amy Plantinga Pauw, “The Supreme Harmony of All”: The Trinitarian Theology of Jonathan Edwards, p. 104

In Plantinga Pauw’s reading, Edwards holds that the economy commences in eternity in the eternal counsels of God. Thus the Father is “head of the Trinity” prior to the incarnation. Indeed, His headship is even prior to the pactum. In any case, I’d welcome any other experts to weigh-in as well.

UPDATE #2: Fred Sanders has written a really helpful post today on the pactum, and I want to add a hearty “amen” to every word of it. Among other things, he writes:

I think this theological gasketry [the pactum] is promising. It takes some work to hold the austere classical trinitarianism of the great tradition’s doctrine of God together with the passionate self-giving of God in the Father’s sending of the Son and the Holy Spirit. The conceptual moves that make up the doctrine of the covenant of redemption make room for a divine disposition that is a reality ad intra, yet is directed ad extra; free but not essential; truly rooted in God yet truly not necessary. If it works, it lets you have your cake and eat it, too.

I think the pactum is promising too. Sanders writes in a tweet, “We need [the pactum] to do what it does so well”–that is, to provide a biblical conceptual framework for understanding the connection between ad intra and ad extra. I think the pactum provides that and could perhaps be a rallying point for all sides in more recent controversies.

I’m a standard fourth century trinitarian. I think the Nicene fathers are reading the Bible correctly when they affirm eternal generation, unified divine will, etc. As I’ve mentioned elsewhere, I welcome any attempt to ground the Son’s economic obedience firmly in that tradition. A recovery of the pactum may be helpful toward that end.

I want to commend a new book that Sanders mentions in his post. It just so happens that I have been reading this book over the weekend and have found it immensely helpful in understanding the history of this doctrine. Here’s the info:

Notice especially Fesko’s treatment of the covenant of redemption vis a vis the Trinity. Some of the doctrine’s primary detractors (e.g., Barth, Letham) base their critiques on trinitarian grounds. The answers to those critiques in history and in Fesko’s work are illuminating.