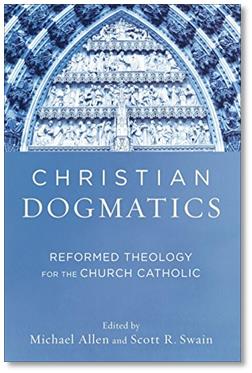 Last month, I commended to you Michael Allen and Scott Swain’s article titled “The Obedience of the Eternal Son.” That essay was so helpful that I was eager to get my hands on their new book Christian Dogmatics (Baker, 2016) which came out earlier this year.

In this book, Swain has a really helpful chapter on the Trinity which is immediately followed by a chapter on the pactum salutis (a.k.a., the covenant of redemption). This is an edited work with multiple authors. But thankfully, Swain wrote both of these chapters, and they should be read together.

Among other things, Swain notes that the pactum salutis has been a fixture in reformed theology since the seventeenth century, and it refers to a pact or a covenant that the Father enters into with the pre-incarnate Son. The pactum refers to the Father’s “eternal appointment of the Son of God, by way of covenant, to become the incarnate redeemer and head of his adopted siblings” (p. 109).

Swain notes that because the pactum occurs in eternity before the incarnation, the doctrine has been criticized as undermining the orthodox doctrine of the Trinity. Karl Barth says that the pactum divides the “Triune Godhead” into “two distinct subjects” (p. 121). Robert Letham argues that the doctrine “opens the door to heresy” because it divides the singular divine will of God and amounts to tritheism. Letham writes:

Swain nevertheless defends the pactum by showing its biblical warrant and by showing how it coheres with Nicene orthodoxy. He writes:

“When it comes to the relationship between the pactum salutis and the divine will, we must consider not only that will’s unity, but we must also consider that will’s tripersonal manner of subsistence if we are to appreciate the doctrine’s status as an instance of orthodox Trinitarian reasoning” (p. 122).

Swain explains that the Son’s pre-incarnate submission to the Father in the pactum is an “application of orthodox trinitarian principles to the locus of God’s eternal decree.” He elaborates:

Again, I think Swain has done some really solid work here. So far, these two chapters alone have been worth the price of the book for me.