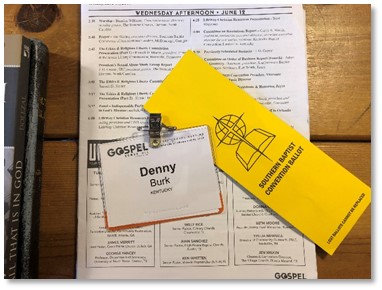 I know that most of the news coming out the Southern Baptist Convention this week relates to official actions on abuse, debates about complementarianism, and the controversial Resolution 9. These are important items that I may write about in coming days, but right now I wish to highlight something that seems to have been overlooked in news coverage and social media. And that item is Resolution 5, “On Sexuality and Personal Identity.”

This resolution is important for a number of reasons, not the least of which is that it is the 2019 SBC’s answer to the controversial Revoice conference that received so much attention nearly a year ago and which met again in St. Louis just last week. Before I can elaborate on the significance of this resolution, I need to explain a little bit about how the SBC operates.

Every year, the President of the SBC appoints a Resolutions Committee. Any Southern Baptist person can propose a resolution for consideration by this committee. The committee has tremendous freedom in how they deal with the resolutions submitted to them. They can either accept the resolution, revise it, write a new one on the same topic, or reject the resolution altogether. Whatever resolutions the committee decides to act on must be approved by a majority vote of messengers attending the convention.

This year, Steve Kern of Oklahoma City, Oklahoma proposed a resolution titled “Answering the ‘Revoice’ Agenda.” While the committee did not move this particular resolution forward, they did decide to speak to the issue. In the committee report, here is their explanation:

While the Committee believes that the Southern Baptist Convention messengers are sympathetic to concerns raised by the resolution, the Committee deemed it best not to condemn this specific conference. The Committee chose instead to address the central matter of controversy by presenting a resolution on sexual desire and personal identity that combines biblical wisdom and pastoral sensitivity. See Resolution #5.

When messengers consulted Resolution 5, they found a biblically faithful and theologically robust statement dealing with the central questions of the Revoice debate. What they also found was a statement that was heavily influenced by the language of The Nashville Statement, which was released by CBMW in 2017 and which was signed by over 180 evangelical leaders and scholars.

This is significant because the founder of Revoice has said that he started Revoice as a response to The Nashville Statement. Because the founder and other Revoice supporters often identify as “gay Christians,” they took particular offense at Article 7 of The Nashville Statement, which says “We deny that adopting a homosexual or transgender self-conception is consistent with God’s holy purposes in creation and redemption.”

And yet, it was this very language that the 2019 SBC Resolutions Committee presented to the convention and which passed unanimously (as far as I could tell from my seat in the arena).

Resolution 5 also echoes Nashville in stating that God’s grace is sufficient to help sinners to experience change and progress over sin in their lives:

Again, the Resolution clearly relies on language that appeared two years earlier in Nashville. As far as the rest of the resolution is concerned, it too reflects the same theological perspective as Nashville.

The resolution’s dependence upon Nashville is clear. It is also clear that the SBC just went on record to affirm the exact same perspective that Revoice was founded to oppose. The Resolutions Committee and thousands of SBC messengers spoke loud and clear on this. This was an unambiguous declaration by Southern Baptists. They are not in favor of the theological perspective underwriting Revoice.

Later this month, the Presbyterian Church in America will hold its general assembly in Dallas, Texas. The general assembly will also be considering proposals designed to answer controversies surrounding Revoice. One of the overtures asks the general assembly to “Declare the Council on Biblical Manhood & Womanhood’s ‘Nashville Statement’ on Biblical Sexuality as a Biblically Faithful Declaration.”

In very short order, Presbyterians will also have a chance to adopt measures similar to Resolution 5 adopted by Southern Baptists at their annual meeting. Stay tuned. In the meantime, the full text of Resolution 5 is printed below.

Resolution 5 – On Sexuality And Personal Identity

WHEREAS, All persons are made in God’s image and should seek to glorify Him in every arena of their lives, including their self- understanding and identity (Genesis 1:26–27; Psalm 100:3; 1 Corinthians 10:31); and

WHEREAS, The Lord calls His people to pursue lives of holiness as a reflection of His holy character (Leviticus 20:7; 1 Peter 1:16); and

WHEREAS, Many in our culture assume the satisfaction of sexual desire is indispensable to human wholeness and flourishing, which leads some to affirm fallen sexual desires as a defining mark of personal identity; and

WHEREAS, Some brothers and sisters in Christ have tried to affirm God’s design for sexuality while embracing a personal identity as a “gay Christian” or a “sexual minority”; and

WHEREAS, This self-understanding and self-expression is open to misinterpretation, affirms a sinful desire as a marker of personal identity, and may imply that one’s sanctification would preclude the possibility of deliverance from same-sex sexual desire; and

WHEREAS, The Bible does not label a Christian’s identity based on past actions or present temptations, but on present justification and future glorification (Romans 8:1–11; 1 Corinthians 6:9–11); now, therefore, be it

RESOLVED, That the messengers to the Southern Baptist Convention meeting in Birmingham, Alabama, June 11–12, 2019, recommend that Christians refrain from describing themselves or embracing a self-identity in ways that suggest affirmation of sinful desires or unbiblical social constructs (Matthew 5:27–30; Galatians 5:19; Ephesians 5:3; 1 Thessalonians 4:3–5); and be it further

RESOLVED, That we call on all Christians who struggle against same-sex attraction to forsake any self-conception or personal identity that is contrary to God’s good and holy purposes in creation and redemption; and be it further

RESOLVED, That we commend the faithful witness of Christians who experience same-sex attraction, who remain chaste out of faithfulness to Christ, and whose costly obedience Jesus promises to reward (Matthew 16:24–26; 19:29); and be it further

RESOLVED, That we affirm that God’s grace provides both pardon and power so that a follower of Jesus Christ can mortify sinful desires and walk in a manner worthy of the gospel (1 Corinthians 10:13; and be it finally

RESOLVED, That we call on Southern Baptist churches to call sinners to repentance while ministering, encouraging, fostering hospitality, and extending Christlike love toward those brothers and sisters who experience same-sex attraction.

Saint Paula Is No Exemplar of the Faith