Last night I stayed up until after 1am watching the annual General Assembly (GA) of the Presbyterian Church in America (PCA). The debate went into the wee hours of the night because the assembly had several measures before it relating to sexuality and gender identity. The most controversial measure was Overture 4, which is titled “Declare the Council on Biblical Manhood & Womanhood’s ‘Nashville Statement’on Biblical Sexuality as a Biblically Faithful Declaration.”

Therefore be it resolved that the Calvary Presbytery hereby overture the 47th General Assembly and asks it to declare the Council on Biblical Manhood & Womanhood’s “Nashville Statement” on biblical sexuality as a biblically faithful declaration and refer the “Nashville Statement” to the Committee on Discipleship Ministries for inclusion and promotion among its denominational teaching materials.

Melton Duncan introduced Overture 4 to the assembly, read the entire text of Nashville, and then spoke in favor of its adoption. What followed was a debate that lasted for over an hour. Greg Johnson and Scott Sauls were among those who spoke against the overture. Lig Duncan, Kevin DeYoung, Rick Phillips, and Harry Reeder were among those who spoke in favor of it. The debate was lively but charitable.

Opponents of Overture 4 attempted a parliamentary procedure to derail Overture 4, but that attempt failed as nearly 71% of the assembly voted against it. In the end, 60 percent of the Assembly voted to affirm the Nashville Statement.

I think it is really important to put last night’s events into a larger context. The PCA has been facing a great deal of internal controversy over the last year because of the Revoice Conference which was hosted by a PCA church in St. Louis. In fact, Greg Johnson, the pastor of the church that hosted Revoice, rose to speak against Overture 4 in the debate last night. Revoice was mentioned during the debate, and it certainly formed a part of the backdrop for the introduction of Overture 4 in the first place.

This is significant because the founder of Revoice has said that he started Revoice as a response to The Nashville Statement. The founder and other Revoice supporters often identify as “gay Christians,” and they took particular offense at Article 7 of The Nashville Statement, which says “We deny that adopting a homosexual or transgender self-conception is consistent with God’s holy purposes in creation and redemption.” That is why it was no surprise that Greg Johnson spoke against Article 7 in particular during the debate.

Nevertheless, 60 percent of the PCA General Assembly went on record to affirm the very statement that Revoice was founded to oppose. What makes this even more remarkable is that this happened right on the heels of the Southern Baptist Convention’s adoption of a similar measure earlier this month—a resolution that relies on the Nashville Statement as a response to the Revoice controversy. Thus two major evangelical denominations have weighed-in in a single month, and both have affirmed the theological perspective of Nashville.

It is remarkable that some of the people who spoke against Overture 4 last night began their remarks by affirming Nashville. In other words, some of the people who opposed the overture were open about the fact that they couldn’t find anything wrong with what the Nashville Statement actually says. Their problems were ancillary to the theological substance of the debate. In fact, almost no one raised any issues with the substance of the Nashville Statement, which I think is telling.

As I mentioned above, Greg Johnson was a notable exception to this. He came the closest to actually engaging the substance of Nashville when he criticized Article 7 of the Nashville Statement. Johnson claimed that Article 7 precludes “gay Christians” from acknowledging their own sin struggles. But this is a distortion of Article 7. Several same-sex attracted Christians were instrumental in the drafting of Article 7. Neither they nor any of the other drafters ever intended what Johnson alleges. Look again at the language of Article 7:

“We deny that adopting a homosexual or transgender self-conception is consistent with God’s holy purposes in creation and redemption.”

Adopt means to embrace or endorse. The point of the article is simply to say that it is out of bounds to embrace an understanding of oneself or one’s sin that is at odds with God’s design in creation and redemption. This is not a controversial point, or at least it shouldn’t be among Christians.

Other opponents of Overture 4 claimed that the Nashville Statement has the wrong tone or isn’t “pastoral” enough in its language and can’t be used in actual ministry to gay people. But I think this objection fundamentally misunderstands how confessions function as pastoral documents. When someone asks me, “What must I do to be saved?” I don’t throw a copy of The Baptist Faith & Message at them and tell them to go sort themselves out. That is not how confessions come to bear in tender pastoral moments.

Having said that, I think the “tone” criticisms of the Nashville Statement are misplaced. To prove my point, I would simply encourage you to read the Nashville Statement. As far as confessions go, it actually is unusually pastorally friendly. There are lines in there that I actually would use in an evangelistic encounter or in pastoral counseling. For example:

“The grace of God in Christ gives both merciful pardon and transforming power, and… this pardon and power enable a follower of Jesus to put to death sinful desires and to walk in a manner worthy of the Lord” (Article 12).

“We affirm that Christ Jesus has come into the world to save sinners and that through Christ’s death and resurrection forgiveness of sins and eternal life are available to every person who repents of sin and trusts in Christ alone as Savior, Lord, and supreme treasure. We deny that the Lord’s arm is too short to save or that any sinner is beyond his reach” (Article 14).

These are precious gospel truths that we hold out to ALL sinners, including those struggling with same-sex attraction or identity issues. That is the good news that the Nashville Statement communicates to all sinners.

One last observation about last night’s debate. Greg Johnson spoke powerfully of his own experience, and I was genuinely moved by what he said. I have dear friends and brothers in Christ who have shared with me the exact same kind of suffering that Johnson described last night. I think it is good for all of us to understand this suffering, to be able to enter into such suffering with friends and neighbors, and to bring the mercy of God in Christ to bear in those situations. I would argue, however, that theological clarity is not at odds with ministering well in those moments. On the contrary, such clarity is essential to such ministry.

The PCA General Assembly brought theological clarity last night. They will do so in the days ahead as a study committee continues to work on these issues. And that is something we can give thanks for.

CORRECTION: I miscalculated the vote percentages in the original version of this post. They are now correct. Below is an image of the raw vote totals. 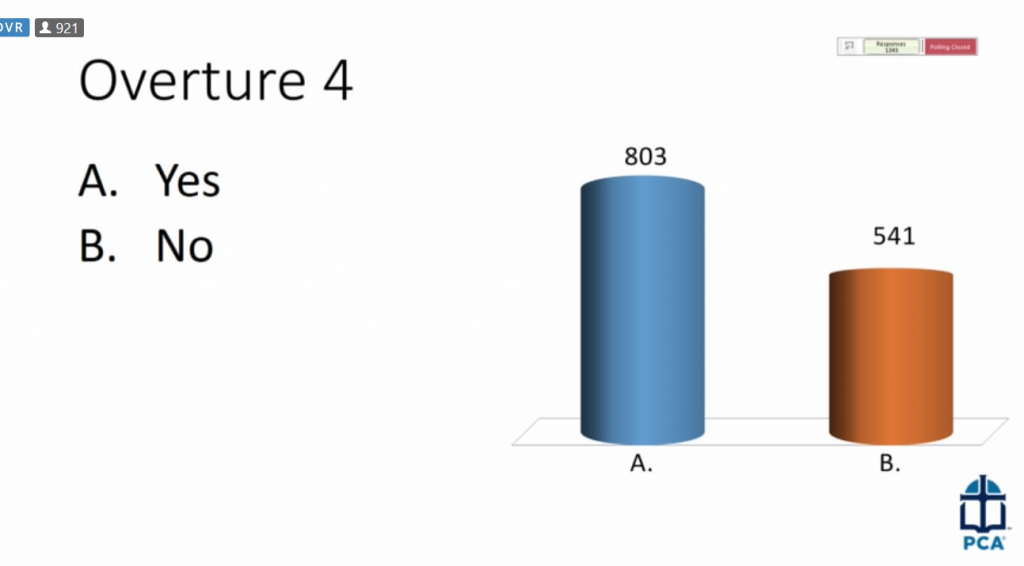