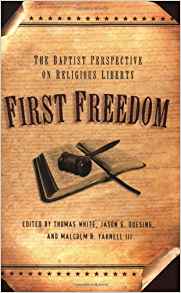 I’ve just begun reading a new release from Broadman and Holman, First Freedom: The Baptist Perspective on Religious Liberty. The book is a collection of papers that were read at the 2005 Baptist Distinctives Conference held at Southwestern Baptist Theological Seminary in Fort Worth, Texas. Among the contributors are Russell Moore, Richard Land, and Paige Patterson.

I just finished Russell Moore’s contribution, and it is provocative to say the least. It’s titled, “Conservative Christians in an Era of Christian Conservatives.” Here’s a snippet in which he takes a whack at the emerging church:

“We should heed the warning to flee a collapsing of the church’s witness and any political party. And yet there is the danger of some in the emerging church who call us to be ‘missional’ and ‘incarnational’ by being politically ambiguous as a strategy for Great Commission effectiveness. This is not accidental since some of the same people call us to be theologically ambiguous uniting with those who deny biblical inerrancy or the exclusivity of Christ or the objective nature of biblical truth. Yes, we must be sure that our churches are not co-opted by any political party or agenda, but a biblical concept of mission and incarnation has to do with clarity not ambiguity. The pomo-Baptists criticize ‘culture warriors’ for treating American culture as a battlefield instead of a mission field again, sometimes with justification. But most of the leaders they criticize are speaking to believers, understanding that political and cultural trends are transforming the minds of church members and must be countered with a more Christian way of seeing reality. A church member who embraces white supremacy or a pro-choice position on abortion isn’t principally a political statistic but a failure of Christian discipleship. Likewise, a Christian who longs for a coercive state church or who doesn’t care about religious persecution in the Islamic world doesn’t just have a skewed political ideology but an apathetic heart for the nations, a heart that doesn’t understand the freeness of the gospel or the task of the Great Commission” (pp. 148-49).

Here’s a full listing of the essays included in this volume:

Ch. 3: Thomas White, “The Defense of Religious Liberty by the Anabaptists and the English Baptists”

Ch. 4: Malcolm Yarnell, “Political Theology at the Foundation of the Southern Baptist Convention”

Ch. 5: Richard Land, “The Role of Religious Liberty in the Founding and Development of America”

Ch. 8: Russell Moore, “Conservative Christians in an Era of Christian Conservatives: Reclaiming the Struggle for Religious Liberty from Cultural Captivity”