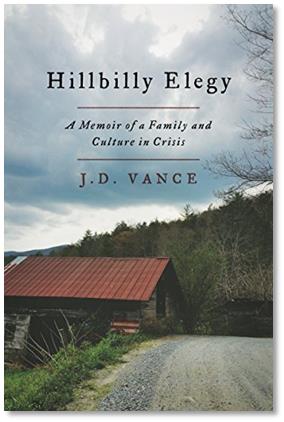 Today, J. D. Vance’s Hillbilly Elegy: A Memoir of a Family and Culture in Crisis officially earned the top rank on The New York Times bestseller list, and deservedly so. I finished this book yesterday, and I think it lived up to the hype. There are already many capable reviews out there, so I won’t offer a full review here. Nevertheless, I would offer a handful of brief reflections.

It would be misleading to say that the book is about the plight of the working poor in America. It is not nearly so abstract. The book is actually a searching, introspective look at the author’s own troubled childhood in the Appalachian region of Kentucky and southern Ohio. Vance tells the story of his life. He is the son of a drug-addicted mother and of a family-deserting father. His mother’s dissolution pressed him and his sister into an endless parade of temporary live-in boyfriends and husbands. He was surrounded by drugs, alcohol, violence, and emotional abuse. The picture he draws of his own childhood is nothing short of heart-breaking. Nevertheless, some key influences “saved” him from repeating the mistakes of his parents.

The book demonstrates in spades that there is no simple statist solution to the so-called “plight of the working poor.” Vance’s experience shows that the problems in these communities lie far beyond the reach of the nanny state. Rather, broken people produce broken cultures and social pathologies. The only way to fix the culture and eliminate the pathologies is to fix the people. And that is the primary conflict of the book. Can people really change? Indeed, Vance’s own doubt about whether he himself could truly escape the demons of his past is one of the most poignant aspects of this story. It is clear that the problems he describes are primarily moral/spiritual in nature, and therefore so are the solutions.

This book is salty. Big time. But I hope that doesn’t turn readers away from this story. It is a story that all of us need to hear and understand. Why? Because it is the story of our neighbors. It is the story of us. That is why reviewers like Rod Dreher have had such high praise for Hillbilly Elegy. Dreher writes:

It’s one of the best books I’ve ever read… For Americans who care about politics and the future of our country, Hillbilly Elegy is the most important book of 2016. You cannot understand what’s happening now without first reading J.D. Vance. His book does for poor white people what Ta-Nehisi Coates’s book did for poor black people: give them voice and presence in the public square.

This is no exaggeration. The book is really that good and that important. Highly recommended.