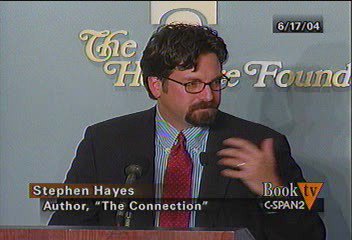 In a previous post, I argued that the attempt to discredit the Iraq war on the basis of the indictment of Scooter Libby is a â€œnon-sequitor.â€ Stephen Hayes says essentially the same thing in the most recent issue of The Weekly Standard:

In the literal sense, attempts to link the case for war in Iraq to the Fitzgerald investigation are illogical. If a White House official lied to a grand jury in 2004, as Fitzgerald contends, that fact has little bearing on the case made for war in Iraq in 2002 (source).

I might have alleged that Hayes has been reading my blog, but that would be an unnecessary charge. Anyone who has read the indictment can plainly come to this conclusion for themselves.