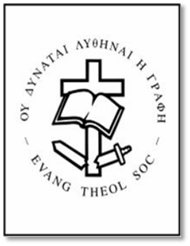 Stan Gundry is Senior Vice President and Publisher at Zondervan Academic and a past president of the Evangelical Theological Society (ETS). On Friday, he posted a letter to the membership of ETS voicing concern about a resolution passed at our annual meeting last November in Atlanta. Before getting into this, a little background is in order.

At last year’s meeting Owen Strachan offered a resolution affirming traditional marriage and the sexual binary taught in scripture. These kinds of resolutions are unusual at ETS, but the rationale was that such a resolution might be in order given the extraordinary Obergefell decision handed down by the Supreme Court just months before the annual meeting. I made the motion that the four points of the resolution be taken together and voted up or down. Here are the four points.

1. We affirm that all persons are created in the image and likeness of God and thus possess inherent dignity and worth.

2. We affirm that marriage is the covenantal union of one man and one woman, for life.

3. We affirm that Scripture teaches that sexual intimacy is reserved for marriage as defined above. This excludes all other forms of sexual intimacy.

4. We affirm that God created men and women, imbued with the distinct traits of manhood and womanhood, and that each is an unchangeable gift of God that constitutes personal identity.

That is the background. Now back to the letter from Gundry. His letter argues that the Society was wrong to pass these four points affirming marriage and the God-ordained differences between male and female. He gives a number of reasons for this, and I encourage you to read them in his letter. I want to interact with one particular point.

Gundry argues that ETS operates on a narrow “doctrinal basis” not a “doctrinal statement.” Because of that, anyone willing to sign-on to the “doctrinal basis” should have a place in the Society—even those who wish to affirm gay marriage based on their understanding of the Bible. He writes:

What better forum is there for collegial discussion and debate of complementarianism and egalitarianism, open theism and classical theism and all points in between, eschatology, the “new perspective” on Paul, and yes, even the question of whether same-sex “marriages” can be defended biblically, than a forum where we have agreed to appeal to the sole source of authority for Christian faith and practice, the Bible, God’s Word written? [emphasis mine]

This is the last paragraph of Gundry’s letter, but I think it is the most important one to note. Differences over eschatology, the new perspective, and even the gender issue are one thing. Differences over homosexuality and gay marriage are another. The apostle Paul says that those who embrace sexual immorality will not inherit the kingdom of God (1 Cor. 6:9-11). To get the issue wrong is not only anti-evangelical. It is also standing squarely against the 2,000-year-old consensus of the Christian church. More importantly, it denies the faith once for all delivered to the saints (Jude 3).

I believe this is an existential question for the ETS. Is the ETS going to include those who “will not inherit the kingdom of God” under the banner “evangelical”? As far as the ETS is concerned, Gundry seems to be arguing that at least some people who affirm same-sex marriage should be allowed into the membership of the Evangelical Theological Society. Does the ETS agree with Gundry? Is the ETS going to include gay-marriage-affirming members so long as they make their case based on the Bible?

I can imagine some scenarios in which everyone would agree that the “basis” idea would be inadequate. What if a member were to argue on the basis of the Bible that we should reinstate race-based slavery? What if a member were to make a biblical case for child abuse? Don’t we all agree that such ideas would be abhorrent and out of keeping with the founders’s original purpose for the society? Why then are some members hesitant to draw the same lines with respect to homosexuality and gay marriage?

These questions again raise old issues. As Gundry has noted, the ETS was founded with only a narrow doctrinal basis—an affirmation of inerrancy. The founders believed that affirming inerrancy would be sufficient to sustain a member’s evangelical bone fides. But they quickly found out that inerrancy was not enough. Early on, they had to add a statement on the Trinity to establish a doctrinal boundary that would keep out those who reject the Trinity (like Jehovah’s Witnesses). The Trinity statement demonstrated that there were people who were willing to make their case on the basis of the Bible but who nevertheless were not Christians, much less evangelicals.

The ETS’s doctrinal basis requires only a belief in the Trinity and inerrancy. Ray Van Neste has argued that in the wardrobe of doctrinal statements, the ETS’s is a bikini. It covers some essentials but does not cover nearly enough. Is it possible that a member in good standing who affirms Trinity and inerrancy might also favor gay marriage? If they did, on what grounds could anyone possibly object?

One could make a case that gay marriage is incompatible with a belief in the Trinity and Inerrancy. But that kind of case was already made during the Open Theism controversy. And that case failed in the membership challenges of Clark Pinnock and John Sanders.

One could make a case that ETS should expand its doctrinal basis to clarify our commitments on these matters. But the ETS has already shown its aversion to expanding the doctrinal basis. Ray Van Neste and I proposed such an expansion only eight years ago, and the Society overwhelmingly defeated it. It is one thing for the Society to adopt a non-binding resolution. It would be something else entirely for it to accept an amendment to its doctrinal basis. I could be wrong, but I can hardly imagine the Society approving one now on a matter that will necessarily implicate the gender issue.

Bottom line: The ETS has shown little interest in drawing more boundaries or in strictly enforcing the current boundaries. If that situation holds, shouldn’t we expect more presentations from members affirming gay marriage? Gundry is arguing that this is exactly the kind of Society we need to be. I am wondering how many members agree with him. I could be wrong, but my sense is that the vast majority of ETS members don’t agree with him. But having said that, I see no evidence that the Society has the will to do anything about it.

I have no plans to spearhead another effort to amend ETS’s doctrinal basis. But members should recognize that ETS is a democratic society. Thus ETS will be what its members allow it to be. Our policies allow for members to affirm gay marriage so long as they base their arguments on the Bible. If the members allow this slow-motion drift in the direction of affirming gay marriage, they should not be surprised when the Society is eventually gutted of its evangelical identity. And that is something that Carl Henry, Roger Nicole, and the other founders never intended for ETS.