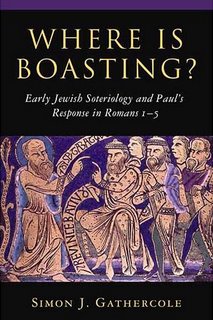 Simon J. Gathercole fires a salvo into the ongoing battle over Paulâ€™s doctrine of Justification and the new perspective on Paul. In Where Is Boasting: Early Jewish Soteriology and Paulâ€™s Response in Romans 1-5, Gathercole contends with the growing consensus among Pauline scholars that the Judaism of Paulâ€™s day was not a legalistic religion of merit, but a gracious dispensation of covenantal election. This work represents Gathercole’s Ph.D. dissertation which he wrote under the supervision of James D. G. Dunn, with whom Gathercole is in decided disagreement.

Gathercole argues that E. P. Sandersâ€™ scheme of â€œgetting inâ€ and â€œstaying inâ€ has very little eschatology (p. 23). That is, Jewish soteriology was based not merely on divine election (Ã  la covenantal nomism), but also on final salvation by works (Ã  la eschatological judgment). According to Gathercole, new perspective scholars have overemphasized the former at the expense of the latter. Gathercole attempts to show that the evidence of second-Temple Jewish literature paints a different picture.

Gathercole traces the theme of â€œboastingâ€ in second-Temple Jewish texts (Part 1) and in Paulâ€™s argument in Romans 1-5 (Part 2). He shows that â€œboastingâ€ in Paul and the Jewish literature refers to â€œconfidence of vindication in the final judgmentâ€ (p. 23). Such â€œboastingâ€ relies on obedience to the totality of Jewish law as the condition of and basis for final vindication in the final judgment. For Gathercole, salvation in Judaism, contrary to new perspective scholarship, does rely on works of obedience.

Gathercoleâ€™s work is important because it challenges one of the central claims of New Perspective proponents. They have alleged that the Judaism of Paulâ€™s day was not legalistic because â€œlegal worksâ€ were not viewed as the basis for â€œgetting intoâ€ a right relationship with God. â€œLegal worksâ€ were merely a means of â€œstaying inâ€ that right relationship.

Gathercole has shown that second-Temple Judaism did indeed hold to a final salvation for the righteous on the basis of works (p. 266). In other words, New Perspective scholars have emphasized the gracious character of Israelâ€™s election at the expense of the legal works that are required for one to stand at the final judgment.

In many ways, what Gathercole has done is to balance the scales a little bit. He shows that there has been somewhat of a false antithesis between election and legalism in descriptions of first century Judaism. For Gathercole, Jewish soteriology is based both on divine election and on eschatological salvation by works (p. 33). Any description of Judaism that fails to emphasize both is not being faithful to the sources.

Some reviewers of Gathercoleâ€™s work allege that New Perspective scholars have always given eschatological salvation by works its proper place in describing Jewish soteriology. But this reviewer disagrees with that assessment. New Perspective proponents rarely if ever give proper weight to the indications that Judaism was in some sense legalistic. Gathercole offers a needed course correction in this respect.

This is a valuable book and a must read for anyone who is interested in getting outside of the echo-chamber that is modern Pauline scholarship. Gathercole has made his pointâ€”rather, the sources have made their point, and every New Testament scholar would do well to hear them.