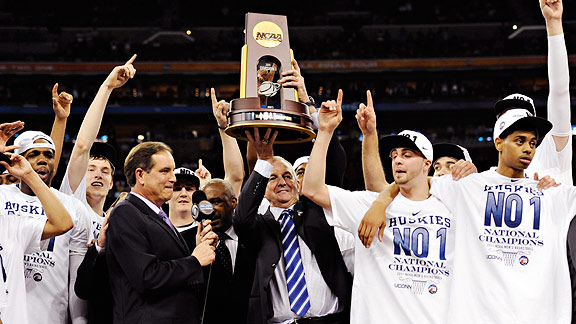 Well, the tournament is over. Both teams in the final game played horribly. The only thing that could have redeemed this pitiful display would have been a Cinderella victory by Butler. But that didn’t happen. UConn lifted the stink enough in the second half to pull out the win.

As I write this, the trophy presentation is gearing up, and some guy behind the scenes is cuing up the “One Shining Moment” highlight reel from the 2011 tourney. I wonder if any of you out there in internet land will agree with me that “One Shining Moment” is a really bad soundtrack for the highlight reel. Which brings me to the point of this post. If you could change the music for the annual highlight reel, what song would you choose? Perhaps the NCAA could shine the moment with “I believe I can fly” by R. Kelly or “Basketball” by Kurtis Blow. Really, almost anything would be better. What say you?