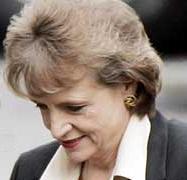 WASHINGTON – Confronted with criticism from both the left and right, Harriet Miers on Thursday withdrew her nomination to the U.S. Supreme Court.

In a statement, President Bush said he â€œreluctantly acceptedâ€ her decision to withdraw, after weeks of insisting that he did not want her to step down.