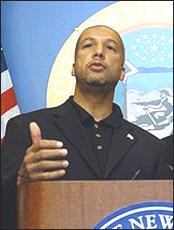 The city of New Orleans had a set of emergency procedures in place before Katrina hit that pertain to such events as catastrophic Hurricanes. The document is titled: â€œCity of New Orleans Comprehensive Emergency Management Plan.â€ This document outlines the plan that the city is to follow in case of an emergency evacuation. It says the following:

â€œConduct of an actual evacuation will be the responsibility of the Mayor of New Orleans in coordination with the Director of the Office of Emergency Preparedness, and the OEP Shelter Coordinator . . . Transportation will be provided to those persons requiring public transportation from the area . . . The evacuation must be completed before the arrival of gale force winds.â€

The plan also puts the New Orleans Office of Emergency Preparedness in charge of providing shelters for those citizens who need to evacuate.

â€œEmergency shelter operations are the responsibility of the Office of Emergency Preparedness Shelter Coordinator. Shelters are provided by the Orleans Parish School Board, while manager training and support activities and supplies are provided by the Office of Emergency Preparedness . . . Shelter demand is currently under review by the Shelter Coordinator. Approximately 100,000 Citizens of New Orleans do not have means of personal transportation.â€

A supplement to this plan titled Louisiana Emergency Operations Plan (supplement 1A) states the following:

â€œThe primary means of hurricane evacuation will be personal vehicles. School and municipal buses, government-owned vehicles and vehicles provided by volunteer agencies may be used to provide transportation for individuals who lack transportation and require assistance in evacuating.â€

The State of Louisiana Emergency Operations Plan also addresses the issue of authority in the event of a disaster situation:

â€œThe governor of Louisiana has the ultimate responsibility for direction and control over state activities related to emergencies and disastersâ€ (source).

What is clear from these documents is that the Governor of Louisiana and the Mayor of New Orleans had the primary responsibility to evacuate and shelter the citizens of New Orleans.

For some reason, these responsibilities are not being accurately reported in the news coverage of the disaster. I donâ€™t think that the reporting should focus on whoâ€™s to blame at this point. That can wait until we have a more accurate account of the response from city, state, and federal officials. But what this does demonstrate is that reporters should cease and desist from framing this disaster as a failure of federal authorities. Such an assumption is wrong on its face.