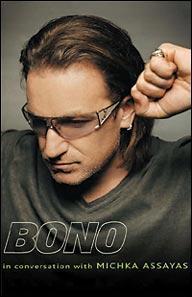 For you rabid U2 fans, I thought you might be interested in an interview with Bono appearing on the Christianity Today website. The interview appears under the title â€œBono: Grace over Karma.â€ Among other things, Bono is able to articulate a fairly clear profession of faith in Christ.

â€œI’m holding out that Jesus took my sins onto the Cross, because I know who I am, and I hope I don’t have to depend on my own religiosity . . . I love the idea of the Sacrificial Lamb. I love the idea that God says: Look, you cretins, there are certain results to the way we are, to selfishness, and there’s a mortality as part of your very sinful nature, and, let’s face it, you’re not living a very good life, are you? There are consequences to actions. The point of the death of Christ is that Christ took on the sins of the world, so that what we put out did not come back to us, and that our sinful nature does not reap the obvious death. That’s the point. It should keep us humbledâ€¦ . It’s not our own good works that get us through the gates of heaven.â€

I donâ€™t know much about Bonoâ€™s religious commitments or how his definition of terms may vary from that of the typical North American Evangelical. But at first blush, this isnâ€™t too shabby.

The interviewer (who is a skeptic, to say the least) goes on to ask: â€œChrist has his rank among the world’s great thinkers. But Son of God, isn’t that farfetched?â€ Bono responds:

â€œNo, it’s not farfetched to me. Look, the secular response to the Christ story always goes like this: he was a great prophet, obviously a very interesting guy, had a lot to say along the lines of other great prophets, be they Elijah, Muhammad, Buddha, or Confucius. But actually Christ doesn’t allow you that. He doesn’t let you off that hook. Christ says: No. I’m not saying I’m a teacher, don’t call me teacher. I’m not saying I’m a prophet. I’m saying: â€˜I’m the Messiah.â€™ I’m saying: â€˜I am God incarnate.â€™ . . . So what you’re left with is: either Christ was who He said He wasâ€”the Messiahâ€”or a complete nutcase . . . The idea that the entire course of civilization for over half of the globe could have its fate changed and turned upside-down by a nutcase, for me, that’s farfetched . . .â€

Here, Bono sounds as if heâ€™s been reading C. S. Lewisâ€™ â€œLord, Liar, or Lunaticâ€ trilemma. Whatever the case, I have to give Bono credit for giving such a thoughtful answer.

Notwithstanding his apparent misunderstanding of the relationship of the Old Testament to the New, the entire interview was a pleasant surprise.