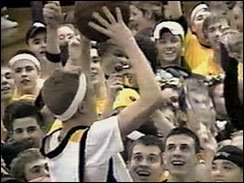 This is the kind of story that makes your heart full and your eyes well up with tears. Itâ€™s a Rudy-esque tale about a kid with autism. Itâ€™s the story of Jason McElwain, and itâ€™s so good that the movie studios are already lining up to make a movie about him.

Jason McElwain is the waterboy for his high school basketball team, and heâ€™s also their biggest fan. Because Jason is a senior and the teamâ€™s most ardent supporter, the coach decided to let him suit-up with the team for the last home game of the season. Then, the coach actually let him play for the last four minutes of the game. As Jason goes into the game, the fans hit their feet and roar with excitement. This much of the story is enough for the makings of a great movie, but what happened next makes it even better.

When Jason hits the court, he starts shooting the basketball. He misses two shots right off the batâ€”one jump shot, one lay-up. On his third shot, he drains a three-pointer, and the crowd goes absolutely nuts. He then proceeds to drop five more three-pointers, finishes the game with 20 points, and ties the school record for most three-pointers in a game. 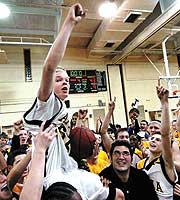 As the buzzer sounds, the student body rushes the floor and carries Jason off the court in triumph.

I know this sounds too fantastic to believe, so I would encourage you to see for yourself. Someone videotaped the game. Greatness.