Last night, I saw the movie “13 Hours: The Secret Soldiers of Benghazi.” And let me just say, it was very well done. Viewers should be advised that this is not a movie for children as it contains all the grit and profanity of soldier life. It also depicts some pretty gruesome wartime violence. Nevertheless, it does tell the story of what happened in Benghazi on September 11, 2012 when a terrorist assault killed four Americans, including U.S. Ambassador Chris Stevens. It is compelling material to say the very least. I am not going to render a full review of the movie in this space but would offer four brief reflections:

1. The guys who fought that night against the terrorist onslaught are heroes. Full stop. Not every hero gets a movie to tell their story, but these did. And it was well-deserved.

2. Readers of this blog will remember that I wrote a good bit about the Benghazi attacks back in 2012 and 2013. We know a lot more now than we did back then, but some of the details about what actually happened that night are still contested. And even though the presidential election of 2012 is a distant memory, the politics of Benghazi still color how people view the events of that fateful night.

This film’s account is based on Mitchell Zuckoff’s 2014 bestseller 13 Hours: The Inside Account of What Really Happened in Benghazi, which is based on eyewitness testimony from five surviving CIA operators. Both the book and the film portray the CIA station chief “Bob” as the one who told the CIA special operators to “stand down” during the initial moments of the attack on the compound where Ambassador Stevens and his security detail were holed-up. It was that delay that led to Ambassador Stevens’s death.

The Washington Post interviewed “Bob” last week, and “Bob” claims that he never gave the “stand down” order. Nevertheless, Zuckoff stands-by the eye-witness reports that say he did. Who’s right on this one? It is a tough call, but I find it interesting that Bob’s own testimony to the Post is far from conclusive. “Bob” himself admits that there was a twenty-minute delay in response while he looked for reinforcements. In other words, whether or not “Bob” said the words “stand down,” Bob is admitting that the twenty-minute delay happened while he looked for help.

3. It is still baffling to me how these coordinated attacks could ever have been mistaken as violence arising from spontaneous protests against a video. Nevertheless, that is how the Obama administration portrayed the attacks for fourteen days after the attacks occurred.

Gov. Mitt Romney famously brought this up during a debate with Pres. Obama in October of 2012. Romney pointed out the administration’s delay in recognizing Benghazi as a terror attack, and Pres. Obama denied it. The debate moderator Candy Crowley weighed-in with an erroneous fact-check to support Pres. Obama’s account, and the rest is history. It was an exchange that ended Romney’s momentum after he handily won the first debate. It was an error on Crowley’s part, yet it likely impacted the outcome of the election. That is how much it turned the tide in that debate.

Still, the exchange reminds us that the administration mischaracterized these attacks for fourteen days after the fact. How could that be? Wouldn’t the President and his subordinates have been briefed well before then about what actually happened? The men killed on top of the CIA Annex were struck by mortar fire—a weapon that requires coordinates and planning. Didn’t the U.S. know that night that the weapons used against Americans suggested a coordinated attack? So why the misleading claim that the attacks were a spontaneous response to an offensive video circulating in the U. S.? The film enables viewers to see how implausible the “offensive video” explanation was from the get-go. 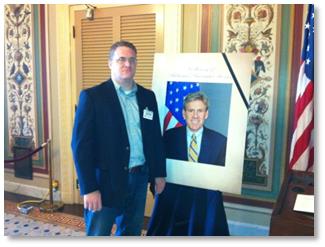 4. Three days after the Benghazi terrorist attacks, I had the opportunity to visit the U.S. Capitol and to view the memorial to Ambassador Chris Stevens that was placed outside the Senate Foreign Relations Committee room. There was a picture of Ambassador Stevens and a book for writing down expressions of sympathy. It was a grim reminder of the real loss of human life that happened that night. And at the end of the day, that is what the film “13 Hours” is about—the people who fought and sacrificed in service of their country. These were real people with real families who suffered grievous loss that night. This film honors their sacrifice, and for me that alone makes it worth the price of admission.