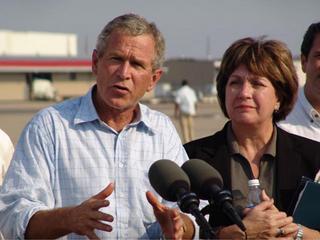 Apparently, the Bush Administration believes the situation in New Orleans has been mismanaged by state and local officials. Tonight, the Washington Post reports that federal officials have attempted to take command over the National Guard troops that are currently under the authority of Louisiana Governor Kathleen Blanco.

â€œBehind the scenes, a power struggle emerged, as federal officials tried to wrest authority from Louisiana Gov. Kathleen Babineaux Blanco (D). Shortly before midnight Friday, the Bush administration sent her a proposed legal memorandum asking her to request a federal takeover of the evacuation of New Orleans, a source within the state’s emergency operations center said Saturday.

â€œThe administration sought unified control over all local police and state National Guard units reporting to the governor. Louisiana officials rejected the request after talks throughout the night, concerned that such a move would be comparable to a federal declaration of martial law . . .

â€œA senior administration official said that Bush has clear legal authority to federalize National Guard units to quell civil disturbances under the Insurrection Act and will continue to try to unify the chains of command that are split among the president, the Louisiana governor and the New Orleans mayor.

â€œLouisiana did not reach out to a multi-state mutual aid compact for assistance until Wednesday, three state and federal officials said. As of Saturday, Blanco still had not declared a state of emergency, the senior Bush official saidâ€ (source).