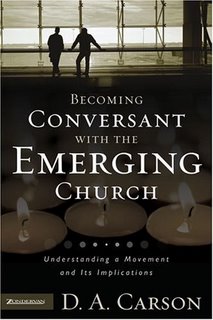 Carson, D. A. Becoming Conversant with the Emerging Church: Understanding a Movement and Its Implications. Grand Rapids: Zondervan, 2005. 250pp. $14.99.

If you were wondering whether D. A. Carson had an opinion on the so-called â€œemergent churchâ€ movement, wonder no more. In his new book, Becoming Conversant with the Emerging Church: Understanding a Movement and Its Implications, Carson delivers a biblical and theological wallop against a movement that he argues has been animated by the values of postmodernity. Carson saves what is perhaps his severest denunciation for the very last page of the book, and it packs quite a rhetorical punch against emergent thought: â€œDamn all the false antitheses to hell, for they generate false gods, they perpetuate idols, they twist and distort our souls, they launch the church into violent pendulum swings whose oscillations succeed only in dividing brothers and sisters in Christâ€ (p. 234).

The book does not begin with the same stark censure that it ends with, but rather builds to its acerbic conclusion. The early chapters of the book are largely taken up with a description of the emergent church movement, while the latter chapters build into a crescendo of rather pointed critiques of the same. In chapter one, Carson gives a brief profile of the emergent movement. In chapter two, Carson outlines the emergent churchâ€™s â€œstrengths in reading the timesâ€ (p. 45). In chapter three, Carson discusses what he sees as weaknesses in the emerging churchâ€™s analysis of contemporary culture. In chapter four, Carson evaluates â€œpostmodernismâ€™s contributions and challengesâ€ (p. 87) in what is principally a rehashing of material from his earlier work The Gagging of God. In chapter five, Carson argues that the emergent church has not adequately critiqued postmodernism. In chapter six, Carson points out weaknesses in the movement by critiquing two significant books, one written by a prominent American leader in the movement (Brian McLaren) and one by a British leader (Steve Chalke). In chapter seven, Carson evaluates the emergent movement in light of the scriptures (p. 188). In chapter eight, the concluding chapter, Carson offers a â€œmeditationâ€ on the relationship of objective truth and subjective experience in the life of the Christian.

That being said, there is much more to commend in this little book than there is to critique. Carson tackles the difficult task of describing a movement that is far from monolithic. Yet he is able to capture some characteristics which appear to be common among those in the movement. One characteristic that reoccurs in the writings of emergent writers is a â€œmanipulative antithesisâ€ (p. 104) that is often used to force modernists into the epistemological mold of postmodernity: â€œThis antithesis is rarely argued in the literature, but it is almost everywhere assumed by postmodern writers . . . In effect, the antithesis demands that we be God, with all of Godâ€™s omniscience, or else be forever condemned to knowing nothing objective for sureâ€ (p. 105). In other words, postmodern theologians and their emergent offspring often allege that if we cannot know anything omnisciently, then it is not possible to know objective truth at all. Carson shows throughout this book that this is in fact a false antithesis that is not born out by reason or scripture. He counters that â€œcritical realismâ€ offers a way for us to acknowledge that while we cannot know anything omnisciently, we can know some things adequately (p. 110).

Carsonâ€™s training is that of a New Testament scholar, and more than anything else he brings the scripture to bear upon the ideology of the emergent church (and make no mistake, there is an ideology to postmodernism!). Though he provides scriptural reflections throughout, chapters six and seven in particular contain important material on what the Bible claims about the nature of truthâ€”claims which often stand in stark contrast to that painted by emergent writers. The contrast is often so pronounced that Carson concludes that two of the most significant emergent ministers, â€œboth [Steve] Chalke and [Brian] McLaren have largely abandoned the Gospelâ€ (p. 186).

This book is short, but its length should not be mistaken for a lack of biblical depth and theological insight. It is not only a handy primer on the emergent church, its leaders, and its literature; but it is also a faithful critique of a movement that, taken to seed, undermines evangelical faith.