Preparing food for the Salvation Army Mobile Canteens at 3:30am.
Photo by Josh Ramsey.

We parked our Canteen truck right next to the tents where military vehicles were dropping off and processing evacuees in front of the now infamous Ernest N. Morial Convention Center in New Orleans. This was the site that saw thousands of New Orleans residents stranded without food and bathrooms for days after the levees broke. It became a den of misery and lawlessness.

A Military Policeman informed me that when the army arrived, they found dead bodies inside the Convention Centerâ€”bodies that had been brutalized, some apparently mugged and others raped. It is places like these where the Southern Baptists of Texas Convention (SBTC) has been providing disaster relief to victims of Hurricane Katrina.

The work I was doing was part of the SBTCâ€™s partnership with the Salvation Army. The SBTC and the Salvation Army have set up a staging area in Baton Rouge, LA that is providing disaster relief to those who are in the wake of devastation caused by the Hurrican. A group of Criswell College students (led by me) recently joined in that effort.

The SBTC partnership with the Salvation Army in Baton Rouge requires SBC volunteers to load and to man Salvation Army Mobile Canteens. Canteens are trucks outfitted to transport, to prepare, and to distribute food to victims of disaster. The SBTC staging area in Baton Rouge prepares approximately 20,000 to 35,000 meals per day to be distributed by disaster relief volunteers. On Saturday alone, the so-called â€œbologna brigadeâ€ made 20,000 bologna sandwiches to be distributed to victims. 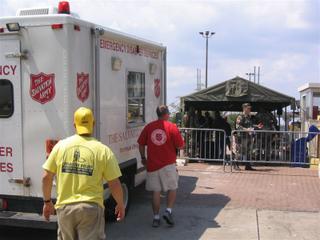 I helped to man a Canteen that provided relief inside the city of New Orleans itself. I found that the catastrophic impact of Katrina was not adequately depicted by the pictures I had seen on the television. Rancid flood waters covered huge swaths of the city, and innumerable buildings lay in ruins. An on-the-ground view of the landscape revealed the sheer scope of the disaster, and it was indeed devastating.

My partner, Mark Bjornholm, and I spent the majority of our time in New Orleans feeding evacuees and rescue workers who were holed up at the Convention Center. A week ago, there were tens of thousands waiting in line to be evacuated. When we served, they were arriving sporadically, and there was no line for them to wait in. The ones who came to our truck were the last hold-outs. One military man told me that these were the ones who would have stayed even longer, but their food, provisions, and will to continue had finally given out.

All the evacuees who arrived at our station looked bedraggled and depressed. And who could blame them? They had lost everything, and now they were leaving home behind. We gave them a meal and a word of condolence for their lost city. And we prayed for them. 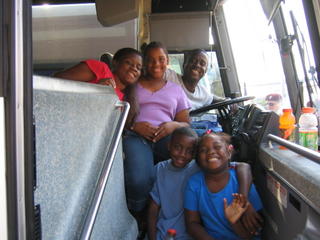 We fed a bus driver named Terrence and his family at the evacuation site. Terrence was able to hold on to his job after losing his home and all his belongings in the hurricane. Now he, his wife Raquel, and his three children (Caitlyn, 11yrs; Corey, 11yrs; and Cayla, 7yrs.) have made Terrenceâ€™s bus their new home.

Other Criswell College students who manned Canteen trucks made it outside of New Orleans proper and into some of the suburbs that were ravaged by Katrina. Johnny Guthrie and John Ailie went into Kenner, LA where residents were still living with standing water and without power. All of the residents, afraid to come out of their homes for fear of a forced evacuation, were relieved to see the Canteen come rolling into their neighborhood. Guthrie and Ailie reported that the people they served said that the SBTC/Salvation Army truck was the first disaster relief team that they had seen, and this nearly two weeks after the storm. Ailie told each person that he fed, â€œWeâ€™re here to serve you and to serve Jesus Christ.â€

Even though the Criswell College studentsâ€™ primary task was to distribute food, they also found time to distribute the Gospel. In just two days, students estimated that they had made 67 Gospel presentations, given out 119 Bibles, and handed out 1,126 tracts.

Bill Davenport, the director of SBTC disaster relief and leader of the staging area in Baton Rouge, said that his biggest concern is that after the media-hype of Hurricane Katrina dies down he will be left with all the food, equipment, and provisions for relief, but no help.

Needless to say, there is much left to do in New Orleans and in the outlying areas that are sheltering evacuees. And there remains a huge question as to what the impact will be when Hurricane Rita reaches the Gulf Coast this weekend. My hope is that whatever the disaster, God will send more workers out to embody the Gospel in disaster relief efforts.