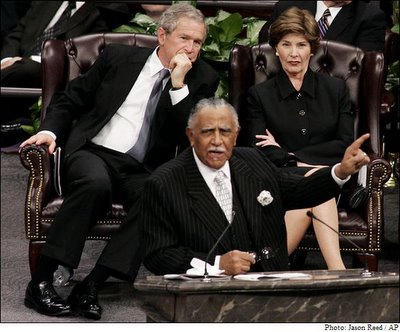 At Coretta Scott Kingâ€™s funeral today, some of the speakers used their eulogies as an opportunity to take cheap shots at President Bush. Indeed, it was no-class politics of the worst kind. The most notable disparagements came from former President Jimmy Carter and Reverend Joseph Lowery.

â€œWe know now there were no weapons of mass destruction over there/But Coretta knew and we knew that there are weapons of misdirection right down here/Millions without health insurance. Poverty abounds. For war billions more but no more for the poorâ€ (source).

â€œThe efforts of Martin and Coretta have changed America, they were not appreciated even at the highest level of government. It was difficult for them personally — with the civil liberties of both husband and wife violated as they became the target of secret government wiretapping, other surveillance . . . and as you know, harassment from the FBIâ€ (source).

President Carter also highlighted the catastrophic aftermath of Hurricane Katrina, a disaster that many still unfairly blame on President Bush. Carter race baited the crowd by implying that the tragedy was somehow due to the color of peopleâ€™s skin:

â€œThis commemorative ceremony this morning and this afternoon is not only to acknowledge the great contributions of Coretta and Martin, but to remind us that the struggle for equal rights is not over. We only have to recall the color of the faces of those in Louisiana, Alabama and Mississippi. Those who were most devastated by Katrina to know that they are not yet equal opportunities for all Americansâ€ (source).

Carter and Lowery threw red meat to the crowd, and the crowd pounced on it. Both of their statements were met with raucous and extended ovations from funeral attendees.

The saddest part about these cheap partisan swipes is that they distract from the legacy of Coretta Scott King as a civil rights leaderâ€”a legacy that should be celebrated by every American, regardless of oneâ€™s party affiliation or views on the Iraq war.

The non-violent protests led by Rev. Martin Luther King and his wife quickened the heart of a dead nation that had imbibed the poison of racism and discrimination. As a result of the movement they led, the conscience of America was revived to reject the unjust laws that were the basis of segregation an to pass the Civil Rights Act of 1964.

This great legacy of Rev. and Mrs. King belongs to all of us. Yet Carter, Lowery, and others made it sound as if it belongs solely to liberal Democrats and all those who oppose George W. Bush. I donâ€™t buy it, and Iâ€™ll wager most of America doesnâ€™t either.