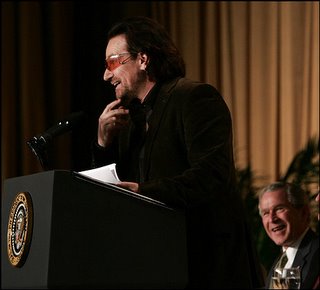 Can a rock star preach? Apparently those who head up the National Prayer Breakfast in Washington, D.C. think Bono can. Last week, he spoke at the annual event with President Bush sitting close by (for a transcript click here). I would argue, however, that although there was much to commend in Bonoâ€™s remarks, there was also much to be concerned about.

We can all appreciate and affirm Bonoâ€™s desire to see the Christian church get more involved in addressing poverty and disease in Africa. We welcome the challenge that he gave to Americans to be more generous in their giving to charities that help bring relief to those who are suffering there. The church of the Lord Jesus Christ has the responsibility to care for â€œthe least of these,â€ and Bono has rightly called all our attention to the needy in Africa.

I fear, however, that with Bono and with many others the gospel message gets muddled in the murky waters of religious pluralism. That is, the distinctive Christian gospel too often gets shuffled to the side so as not to offend well-meaning people of other faiths with whom Christians cooperate in acts of mercy. At the breakfast, Bonoâ€™s appeal to Christian Scripture and to the Koran is a case in point of this danger. Yet, Christians derive their impulse for mercy directly from a gospel that teaches God is merciful to us through Jesus Christ crucified (Romans 12:1-2).

Iâ€™m concerned that Bonoâ€™s language can send the wrong message to a listening world. Many will hear Bonoâ€™s call (and those sympathetic with him) and will wrongly conclude that all religions are equal. They will also miss the truth that God is reconciling the world to Himself exclusively through Jesus Christ (2 Corinthians 5:19).

I donâ€™t think of Bono as an evangelical spokesman, but I do think that he has the ear of many Evangelical Christians. An article in Christianity Today, for example, called Bonoâ€™s remarks â€œprophetic.â€ Even though Bono and others may appeal to the Bible, Evangelicals should listen critically when considering messages such as his. When it comes to extending mercy to the least of these in Africa, letâ€™s all say â€œamenâ€ to Bonoâ€™s call and give until it hurts. Let us cooperate with others in extending this mercy in so far as we can do so without compromising the gospel.

But let us never forget that for Christians the centrality of Jesus Christ crucified is a non-negotiable (1 Corinthians 2:2). We should never compromise this focus in the cause of mercy. Rather, our acts of compassion should bring it into sharper view (Matthew 5:16). Iâ€™m not sure Bono has grasped this yet. Letâ€™s hope and pray that Evangelical Christians do.

See my previous post on Bono: â€œInterview with Bono in CT.â€