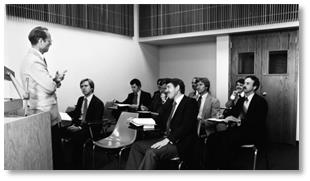 I was in chapel yesterday when I learned that Dr. Charles Ryrie had passed away at the age of 90. Dr. Ryrie’s name is probably most familiar to evangelicals because of his best-selling Ryrie Study Bible. He is known to students of theology as an ardent proponent of Dispensationalism, a view that he cogently summarized in his popular book Dispensationalism and that he taught for many years at Dallas Theological Seminary.

I will leave it to others to discuss Ryrie’s wider life and legacy. Sandra Glahn has penned a fitting tribute that is worth the read. I simply wish to share briefly about my own experience of the man. I knew Dr. Ryrie during my time as a student at Dallas Theological Seminary. But I didn’t know Ryrie as a professor. He had already moved on from DTS by the time I got there, even though his home was still in Dallas.

I became friends with him when I was working as a lifeguard at a health club near campus. Ryrie had been in a car accident some years before, and he began swimming as a way to rehab. So I saw him on a daily basis for the entire time that I worked there. I’m probably one of the few people on the planet who can say that all my memories of Dr. Ryrie were when he was wearing a speedo.

Seriously though, we did have many conversations at the poolside. He always made time to talk to talk to me, and I was very grateful for that. We talked a lot about theology. In fact, we had spirited conversations about things. He was very much concerned about progressive dispensationalism’s gains among evangelical Bible students, but the thing that I was most interested to explore with him was the Lordship Salvation controversy.

I had first become acquainted with Dr. Ryrie’s views after reading John MacArthur’s book The Gospel according to Jesus. It is no exaggeration for me to say that this was a watershed book in my own life, and by the time I met Ryrie I was an ardent proponent of MacArthur’s side of that particular dispute.

So I was very interested to hear from the man himself. The Bible seemed so clear to me on these points, and I wanted to know how he came to his conclusions. He was always gracious and forceful in making his case. He also wasn’t quite where I thought he was theologically on these issues. I asked him once whether genuine believers have to bear fruit. Those of you familiar with that controversy will know the significance of that question. To my surprise, he answered “yes.” I realized at that point that not all “free gracers” are the same. Ryrie certainly had his differences with MacArthur, but he also had his differences with Zane Hodges. At least that was the impression that I got. (I think S. Lewis Johnson may have hinted at this as well.)

Dr. Ryrie had an impressive personal collection of rare Bibles, including a 1611 edition of the King James Bible. I first saw the Bible at an exhibition being held on the campus Southern Methodist University. My jaw dropped when I read the information card about how Dr. Ryrie acquired the Bible. It turns out that he purchased it at an auction where he outbid the University of Texas Library(!) to obtain it. This was just one of many Bible treasures that he owned.

Probably the thing I appreciate most about Dr. Ryrie was his zeal for evangelism. We only met because of his determination to share the gospel with the lifeguards where he swam. No matter who was on duty, Dr. Ryrie was coming at them with the message of Jesus Christ crucified and raised for sinners. And of course he came at me, and thus began a friendship.

Others have known Dr. Ryrie much better than I have. Still, I am grateful to have known him for the short time that I did. He was gracious, kind, and generous to spend time talking to a wet-behind-the-ears theology student all those years ago. I hope I can have that same legacy with my students.