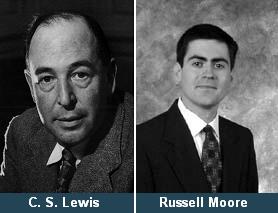 Russell Moore has another great post. This one addresses C. S. Lewisâ€™s views on male headship. The essay is titled, â€œC.S. Lewis and the Quirky Idea of Male Headship.â€

Moore is on a roll in this one. He comments on Wheaton professor Alan Jacobsâ€™ speculation on C. S. Lewisâ€™ view of the gender roles. Hereâ€™s one of Mooreâ€™s quotable zingers:

â€œJacobs argues that Lewis’s views of male headship would be articulated quite differently were he alive today . . . Professor Jacobs assumes then that Lewis’s views on male headship were culturally conditioned, that he would not consider the matter as important if only he could see the orthodox Christian feminism of, what, Christians for Biblical Equality? The Wheaton College faculty?â€

Female Pastors and an Amendment to the SBC Constitution