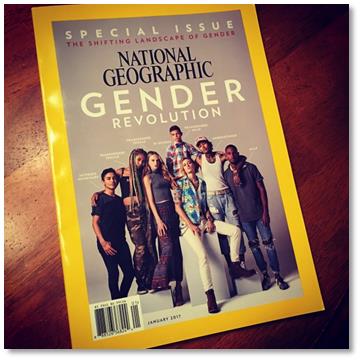 Many of you have likely seen the special issue of National Geographic dealing with transgenderism. The entire issue—and indeed the feature article—is a case study in one-sided propaganda. It celebrates transgender identities as healthy expressions of human diversity. And it shows little to no familiarity with the contested nature of their claims or with scientific evidence that contradicts transgender ideology. The entire issue simply assumes the truthfulness of claims made by some of the most ardent transgender ideologues.

Andrew Walker and I have written a response to this at The Public Discourse, and you can read our entire argument there. I simply want to highlight one item for your consideration. National Geographic makes the case that children with transgender identities might consider medical interventions to transform their bodies to the opposite sex. This might start with hormone blockers that delay puberty, and it might end with so-called sex-change surgeries to reshape genital anatomy and reproductive structures to those of the opposite sex. And they argue that such surgeries are not merely for transgender adults, but also for transgender children.

And then, in one of the most obscene items I’ve ever seen in a major news publication, there is a picture of a 17-year old girl displaying her bare chest still bearing the scars of her recent double mastectomy. Think about this. National Geographic publishes a groundless propaganda piece and exploits the naked body of a minor child to help make their tendentious point. In response to this, we write:

The final page of Henig’s article celebrates the mutilation of minor children with a full-page picture of a shirtless 17-year old girl who recently underwent a double mastectomy in order to “transition” to being a boy. Why do transgender ideologues consider it harmful to attempt to change such a child’s mind but consider it progress to display her bare, mutilated chest for a cover story? Transgender ideologues like Henig never address this ethical contradiction at the heart of their paradigm. Why is it acceptable to surgically alter a child’s body to match his sense of self but bigoted to try to change his sense of self to match his body? If it is wrong to attempt to change a child’s gender identity (because it is fixed and meddling with it is harmful), then why is it morally acceptable to alter something as fixed as the reproductive anatomy of a minor? The moral inconsistency here is plain.

Transgender activists often act as if traditionalists are mistreating transgender persons by failing to acknowledge their identity. But I would simply ask them this question. Who’s mistreating whom in this scenario? Those who mutilate and display that naked chest of female child? Or those who try to help confused children to understand who God made them to be. These questions answer themselves.