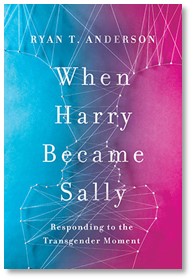 I’ve been working toward a review of Ryan Anderson’s forthcoming book When Harry Became Sally: Responding to the Transgender Moment (Encounter Books, 2018). It really is a fantastic, must-read work. I will resist beginning the review here, but I do want to share a passage from it that extols the virtues of motherhood and homemaking. Anderson writes:

G. K. Chesterton praised the vocation of mother and homemaker as greater than paid employment in the modern marketplace, noting especially the broad range of responsibilities it involves. In her own domain, a home- maker is like the Queen, “deciding sales, banquets, labors and holidays”; she is like Whiteley, the great retailer, “providing toys, boots, sheets, cakes and books”; she is like Aristotle, “teaching morals, manners, theology, and hygiene.” Chesterton remarked:

I can understand how this might exhaust the mind, but I cannot imagine how it could narrow it. How can it be a large career to tell other people’s children about the Rule of Three, and a small career to tell one’s own children about the universe? How can it be broad to be the same thing to everyone, and narrow to be everything to someone? No. A woman’s function is laborious, but because it is gigantic, not because it is minute.

Today, Esolen echoes Chesterton, saying that our culture has gotten this backward. If a woman works full-time in the modern economy, specializing in one task—perhaps cooking, arranging flowers, or performing music—then society praises her. But if she “can do all these things and in fact does them for the people she loves and for those whom she welcomes into her home (and she is not afraid of guests, because her home is always just a whisk or two away from hospitality), we shake our heads and say that she has wasted her talents.” On the contrary, Esolen says, she has put her talents to use. Instead of “preferring the specialist who amputates and cauterizes and does one thing well, for herself primarily and sometimes even at the expense of the family,” we must renew our respect for “the woman of many talents and many tasks in the home.” Like Chesterton, we must acknowledge that the dignity of work does not depend on pay, and that the work done inside the home is just important as the work done outside of it, and perhaps more so.

The modern penchant for denigrating motherhood and homemaking is a morally retrograde farce. Bravo to Ryan Anderson (and Chesterton and Esolen) for seeing and declaring the good, the beautiful, and the true.