Yesterday was the twentieth anniversary of John Piper’s famous “sea shell” sermon at the 2000 Passion conference called “OneDay.” Three years ago, I shared with Sarah Zylstra my memories of the event. There was a lot that we talked about that did not make it into her final article. And there was still more that I didn’t even share with her. So I thought I would briefly recount some of those memories here. Here are my top ten memorable memories of the memorable occasion known as OneDay 2000.

1. The Students – I know this is hard to believe, but I used to be a guitar-playing worship leader. And in the year 2000, I led worship for the K-Life chapter at Highland Park High School in Dallas, Texas. My song list consisted of a lot of this and this but mercifully, none of this. OneDay allowed high school seniors to attend the conference, so we loaded up vans and drove them to Shelby Farms, Tennessee.

2. The Roadtrip – The lovely lady who would become my wife came along to help chaperone, and we ended up driving a van load of high school girls from Dallas, Texas to Memphis, Tennessee. Neato. The girls rocked Backstreet Boys and were singing with gusto every single lyric as only a van full of high school girls could do. But as we drove onto the property at Shelby Farms, conference organizers had posted signs along the road with scriptures and exhortations to prepare our hearts for what was about to happen at OneDay. So I made the gals turn off Backstreet for the rest of the way in. I’m sure they thought I was a dud, but I still think it was the right call. 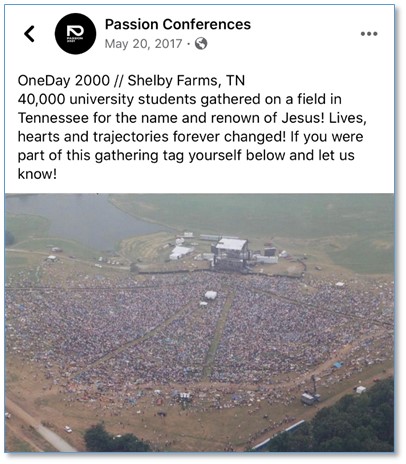 3. The Great Outdoors – There were no conference hotels or big arenas. There were only the expansive fields of Shelby Farms, Tennessee. We camped out. In the rain. With port-o-potties as far as the eye could see.

4. Port-o-potties – I know that I already mentioned the port-o-potties, but they really do deserve their very own recognition on this list. There were about 40,000 of us who showed up for this, and we all slept outside under the stars. But the wise planners of OneDay made biblical provision for us outside the camp in form of port-o-potties and port-o-showers (Deut. 23:13). We are not barbarians after all. And this was one important way that we distinguished ourselves from Woodstock (both from the original and from the inglourious reprise that occurred one year before OneDay). But you need to wrap your mind around just how many port-o-potties it takes to accommodate 40,000 students. Like I said, it was port-o-potties as far as the eye could see, and for obvious reasons you didn’t want to get too close unless absolutely necessary.

5. Guitar dudes – It seemed like there may have been a lot of aspiring worship leaders at OneDay. In camp at night, it seemed like every tent had at least one guitar player and bongo drum guy leading songs around the campfire. Everybody wanted to be Sonic Flood. It was rather cacophonous, as I remember it.

6. Swag Tent – I met Glenn Lucke for the first time while milling around the product in the t-shirt tent. And there began a 17-year long bump-into-each-other-at-conferences-every-three-years-or-so relationship. It’s been very special, Glenn.

7. T-shirts – In those days when the earth’s crust was still hardening, we didn’t have smart phones. Before there were selfies, there were t-shirts. And that’s how we marked our presence at special events. I bought a longsleeve heather Tee with “OneDay” in small black letters on the front. I wore that shirt for seventeen years. It was only three years ago that it finally gave way. Large holes wore through on the left arm, and I had to retire it. I still have some other OneDay Tees in my closet, but none as awesome as the gray heather one.

8. The Cross – The song “The Wonderful Cross” became a thing at OneDay 2000. In one particularly emotive moment, there was an actual life-size wooden cross being passed around during the singing of this song. Two guys walked it in from the back of the crowd and planted it in front of the stage. Students made their way over to it, bowed down before it, and pushed forward to touch it. I thought it was strange, and perhaps even venerative.

9. The Rain – It rained. I kid you not. It stinking rained nearly all day. That didn’t phase the students we brought nor most of the other 40,000 who were there. For them, it just added excitement and unpredictability. But for me and my faithful soon-to-be wife, we just sat on the ground in our rain-slickers shivering while the music and preachers came and went. The main reason I came on the trip was to see and hear Piper. By that point, the Lord had used his ministry mightily in my life. And if sitting in the rain for a while meant I got to hear from him, I was good for it.

10. The Sermon – In Sarah Zylstra’s TGC article, she reports testimonies of people whose lives were decisively changed by Piper’s famous “seashell” sermon. For me, a decisive change had already occurred as a result of messages that Piper preached at Passion ’97 and ’98 (which I wrote about here). Because of those earlier experiences at Passion, I joined the Desiring God tape ministry (yes, cassette tapes!). Desiring God mailed two cassettes with four sermons every month, and I devoured every one of them. By the time I got to OneDay, I had listened to countless Piper sermons. So at Shelby Farms I recognized the “seashell” sermon as a version of a message that he had preached to Bethlehem Baptist Church in February of that year. There are substantial differences between the two sermons but also substantial overlap. The famous “seashell” remark was only in the version delivered at OneDay, and it was indeed as powerful as reported.

God used John Piper’s preaching in a unique and powerful way, not just at OneDay 2000 but also at Passion ’97, ’98, and ’99. OneDay 2000 did produce ripple effects that no one saw coming at the time. There was no “young restless reformed” movement in those days. In fact, I think that what we came to know as the “young restless reformed” movement happened as a result of those days.

It is bittersweet to think about all that has happened over the last twenty years. The “young restless and reformed” was once a force to be reckoned with in evangelical life—so much so that Collin Hansen wrote an entire book about it. But many of the figures profiled in that book have gone their separate ways over the last ten years or so. The “young restless and reformed” seem to be fraying.

But I think that the real fruit of the “seashell sermon” was never going to be in ever-growing conference ministries or parachurch organizations. The real fruit is in the countless missionaries and pastors and ministry workers who were launched by what happened in those days. I’ve seen them. They are still serving in gospel-centered churches even today. God used Piper’s message at a catalyst for so much of that, and that legacy will last into eternity.

What about divorce and abuse?