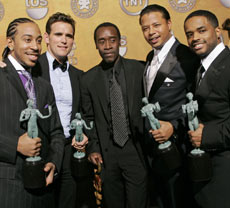 Last night, â€œCrashâ€ won the Oscar for Best Picture at the Academy Awards. I saw â€œCrash,â€ but I am not a fan of the movie. I thought that it was hokey and superficial in its treatment of a serious subject.

In an essay for MSNBC.com, Erik Lundegaard sums it up well.

But what is [the movie] saying? That we all bear some form of racism. That we all â€œstereotypeâ€ other races. That, when pressured, racist sentiments spill out of us as easily as escaped air.

Last month I wrote an article on the best picture nominees (called â€œAnything But â€˜Crashâ€™â€) in which I talked about how the most potent form of racism in this country is no longer overt but covert. Once upon a time, yes yes yes, it was overt, which is another reason why â€œCrashâ€ [is an awful movie]. Itâ€™s doing what simple-minded generals do: Itâ€™s fighting the last war (source).

Lundegaard is right on target. The dialogue in this movie simply does not ring true. Real racism typically does not surface in the way that this film alleges. The situations in â€œCrashâ€ seem contrived and unrealistic at best.

I still canâ€™t believe that this movie won Best Picture. In my view, it was awful.

If you donâ€™t agree with me, thatâ€™s okay. But I recommend that you go and take Lundegaardâ€™s â€œâ€˜Crashâ€™ Quizâ€ (click here). It may change your mind.

P.S. I am reminded by my wife of another reason not to see this movie. Apparently, there were some objectionable scenes in it. I had forgotten about them because I never saw them. We skipped over the scenes when we watched the DVD.